Recently Dan and I went to Milwaukee to attend a Milwaukee Bucks game against the Chicago Bulls. I decided to splurge for court side seats (the Jack Nicholson type seats) because watching the game is totally different down there. We were right behind the Bulls bench as you can see (there is coach Thibs). I also love this picture because I just happened to snap it as they had entertainment right behind the coach and you can see the guy overhead who jumped off a trampoline and dunks a basketball. Also note the security guy on the right giving me the stink eye. 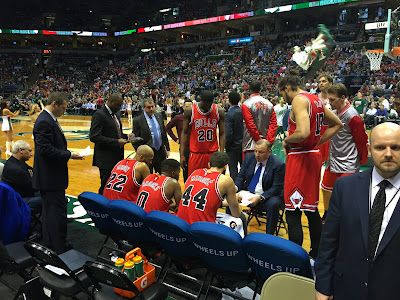 Watching the game from that low is a completely different experience. No matter what the score is, the game is interesting. The players move very quickly and it is hard to understand the plays as they develop (unlike when you look from overhead or up in the cheap seats where I would normally reside). While sometimes the fouls seem fake other times they take bona-fide hard fouls; when you are six and a half feet tall and jumping way over the rim and you end up getting thrown down on the court on your back, that’s a long way to fall. The way the players shoot is also very interesting – when they do jump shots they are almost eye level with the rim and as they do layups and dunks in warmups it often seems like they are barely jumping at all.

Half the fans at the game were from Chicago. They ought to fold that franchise in Milwaukee or find something else to bring in fans; the upper deck was mostly empty vs. Chicago and you’d have to think this is one of their bigger draw games of the year. But there is no way that I am smart enough to explain sports economics…