Vitaliy Katsenelson writes worthwhile content for those interested in investing, art, classical music, and philosophical thoughts about life in general.  See his recent post about coveting and envy.

A piece about skateboarding and flying, with thoughts from St-Exupery.

Speaking about flying, TxRed the Cat Rotator writes about some of her aerobatic experiences.

Once to ev’ry man and nation
Comes the moment to decide,
In the strife of truth and falsehood,
For the good or evil side;
Some great cause, some great decision,
Off’ring each the bloom or blight,
And the choice goes by forever
‘Twixt that darkness and that light.

So the first shots in the shooting war have been fired, to the surprise of practically no one who has been following civic matters over the last six months. Admittedly, that the first would be fired in Kenosha, of all places – that’s a bit of a surprise. Although it isn’t at all startling that a Trump supporter would be gunned down on the streets of Portland by an Antifa thug shortly thereafter, to resounding cheers of approval.

Today marks the 99th anniversary of the first radio broadcast heard by a very large number of people:  the Dempsey vs Carpentier boxing match.  (Although a Carpentier was French, he had quite a following in the United States, owing to his distinguished record as a pilot in the First World War.)

Boxing promoter Tex Ricard had the idea that radio broadcasting might be a good way to increase the popularity of prizefighting…there had previously been some broadcasts of fights in local areas with limited audiences, but what was envisaged for this broadcast was a much larger audience over a much wider area.  David Sarnoff of RCA, a strong advocate for the development of a broadcasting industry, was evidently a driving force behind this approach.  A dedicated phone line from ringside to a transmitter in Hoboken was established, and radio amateurs throughout the Middle Atlantic states were encouraged to set up their receivers in bars, auditoriums, etc, for the benefit of those people (most of the population) who did not have their own radio receivers.  The radio audience was estimated at 300,000 people.

The broadcast was not national in scope, owing to the limitations of the AM radio band, but it was a significant milestone in the the delocalization of information.  Very soon, network broadcasting, enabled by long-distance dedicated phone links, would make possible programs with truly national audiences.  The delocalization trend has continued, with television, intercontinental links via satellite and undersea cable, and the Internet, and has been a powerful driver of social, economic, and political changes.

It’s now required for publicly-traded companies to publish the ratio between the CEO’s annual compensation and that of the median employee.  That ratio is, for example,  367:1 at Disney (Robert Iger), 124:1 at Deere & Co (Samuel Allen), and 50:1 for Whirlpool (Jeff Fettig). Link

These numbers (which, it should be clarified, include seasonal and part-time employees) have caused much alarm in many quarters, and even referred to as heralding a “crisis of capitalism.”

But why stop at CEOs and other business executives when requiring this kind of analysis?  My idea is that there are many other fields in which high-visibility disclosures could be interestingly required…

In movies, for example, it should be required that the opening credits include the ratio of the pay of each of the top 5 stars to the median pay of the entire crew that worked on the film–including accounting clerks, boom operators, sweepers, and various ‘assistants to’.

In professional sports, team uniforms should display prominently the total value of the player’s current contract.  This feature would greatly add to the pleasure of fans, who could instantly and continuously compare the player’s financial value to his demonstrated, moment-by-moment playing-field value.

At colleges and universities, a sign out front of the president’s mansion should display the ratio of his compensation to that of the median faculty member, which category of course must include the starvation-paid adjunct professors.  (The compensation number for the president should certainly include the imputed value of his university-provided mansion and any other similar benefits, such as cars and drivers.)

For politicians, the disclosure problem is a little more complicated, since in many cases the main financial payoff for these jobs is in the form of “deferred compensation”, i.e., lobbying positions and consulting contracts offered after the term of office ends, in recognition of services rendered while in office.  About all I can think of for the politician class is that, for all public appearances, they must wear jackets, with the names of their top sponsoring/contributing organizations prominently emblazoned, in a manner similar to the way racecar drivers display the names of their sponsors.

There are probably a lot of additional possibilities for disclosure and transparency, which the ChicagoBoyz and Chicago Grrrlz and Readerz can surely suggest.

Concerning those who support the CEO pay-ratio requirement but would object to these further suggestions…I have to wonder if their primary agenda really concerns ‘inequality’ or is really about something else.

I’m tired of doom and gloom so I thought I would post something a bit different. Sailing ! 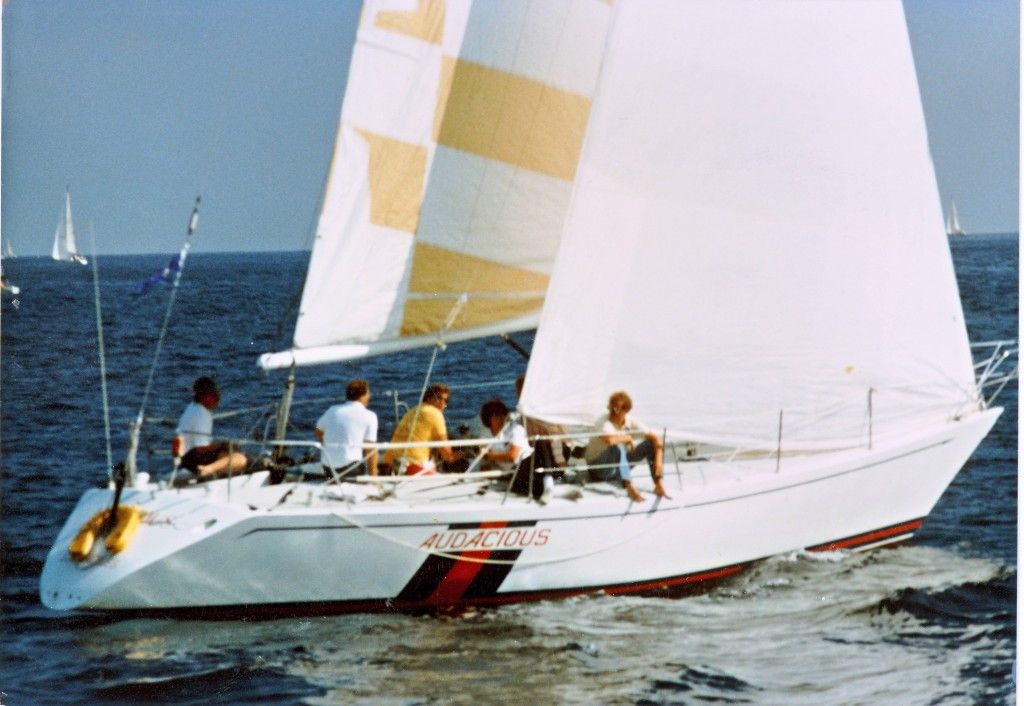 In 1981, I sailed my 40 foot sailboat to Hawaii in the Transpacific Yacht Race. That year some large yachts had what were called “Sat Nav ” receivers aboard to track a system of satellites that required continuous tracking and took quite a bit of electrical power. It is now called “Transit” or “navSat”

Thousands of warships, freighters and private watercraft used Transit from 1967 until 1991. In the 1970s, the Soviet Union started launching their own satellite navigation system Parus (military) / Tsikada (civilian), that is still in use today besides the next generation GLONASS.[10] Some Soviet warships were equipped with Motorola NavSat receivers.

My small sailboat could not use such a system. It drew about an amp an hour, far too great a drain on my battery. For that reason I used a sextant and sight tables like these, which are published for the latitudes to be sailed. 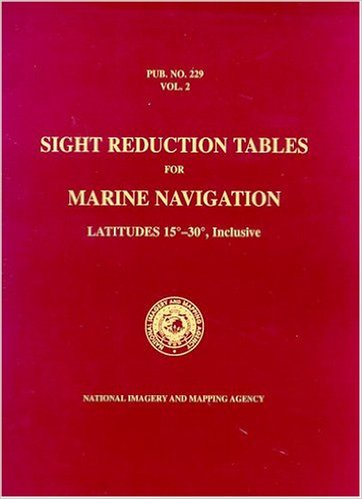 That volume is published for latitudes 15 degrees to 30 degrees, which are the ones we most sailed. Hawaii is at about 20 degrees north and Los Angeles is 35 degrees north. The sight tables provide a set of observations that can be compared with an annual book called a “Nautical Almanac.” As it happens, the Nautical Almanac for 1981 is used for training and is still in print. 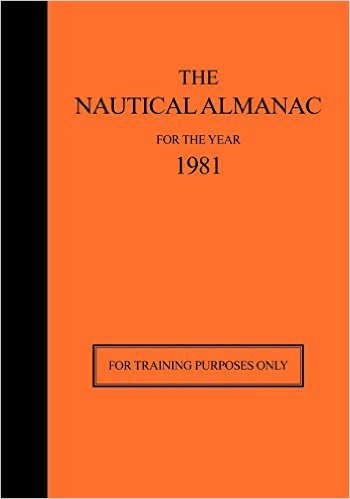 The third component, besides the sextant, of course, is a star finder, like like this one, to aid with navigational stars.

The first thing one needs is an accurate clock. This is the reason why sailing ships need a chronometer in the 18th century.

Harrison solved the precision problems with his much smaller H4 chronometer design in 1761. H4 looked much like a large five-inch (12 cm) diameter pocket watch. In 1761, Harrison submitted H4 for the £20,000 longitude prize. His design used a fast-beating balance wheel controlled by a temperature-compensated spiral spring. These features remained in use until stable electronic oscillators allowed very accurate portable timepieces to be made at affordable cost. In 1767, the Board of Longitude published a description of his work in The Principles of Mr. Harrison’s time-keeper.