I remember when I first joined companies I assumed that the executives in charge knew what they were doing and wouldn’t do something ridiculously stupid. After a while I came to learn that this wasn’t the case.

In Chicago recently an effort is underway to increase the use of bikes and create additional lanes for safety. At the same time they are attempting to create a bus corridor in the loop. 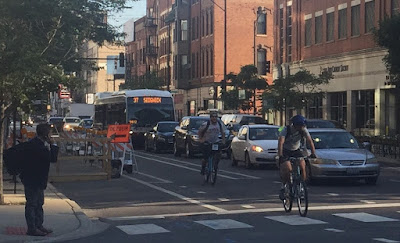 The net result, sadly, is utter and complete gridlock. I have stopped taking the bus unless the weather is horrendous because many of the intersections between River North and the Loop are facing gridlock, where cars are in the intersection after the light changes and no one can move. This was already the case on Thursdays and Fridays after work as everyone moved to exit the city at one time.

They are also building a lot of new high rises, particularly near the Merchandise Mart / Wolf Point. It is incredible that they are able to pack more high rises into that area because traffic is unbelievably bad at that location, already. There is a Brown Line stop nearby but that only is useful for those on that train line and most of the wealthy folks that live / work in that location will likely drive frequently.

On the other hand, it is good for the “steps” that I track on my iPhone. Since taking a cab or even the bus is mostly pointless I am walking to work more often. When the weather gets terrible I will likely just sit on the bus and read my iPhone like everyone else while sitting motionless in traffic.