I don’t really get into politics too much. I don’t have the time or energy to follow every single candidate’s nuanced positions. Frankly, I think I am like the vast majority of Americans who make their decisions on who to vote for either on the way to the polling place, or actually inside the polling booth. That said, watching what little news I get, I am happy to see that one of my heroes and a fellow Chicago Boy is getting a lot of attention these days… 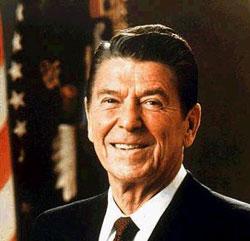 Everyone is claiming the Reagan legacy. Even Democrats are now fighting about who said what about Reagan. I love it. If all the talk gets just a few kids to read up on who he was and what he did, we will all be further along.

For now, I will let Reagan speak for himself.

I hope we see another Reagan like figure someday before I die. But I am not counting on it.

28 thoughts on “The Man Who Grew Up In Dixon”