Portland, Oregon hosts “fleet week” where navy ships (including from Canada) dock alongside the river right next to downtown and offer tours and set up booths and the like. This year I was excited because USS Jackson, an Independence Class Littoral combat ship was arriving and I would get to see what an advanced combat craft looks like up close. I also found out a key link to “disruption” which has been a theme of my recent analysis and posts. 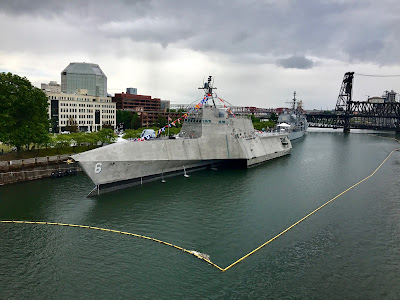 The first thing you notice is the unique hull (compared to traditional warship designs). This design is supposed to let it operate in shallow waters near coastlines and also deliver very high speed – up to 50 knots – although the top speed is classified. The navy had a chain link fence up and armed guards with M16 weapons and a sign saying “use of deadly force authorized” so they were not kidding around.

That same day I received my copy of “Modern War”, a magazine published by Strategy and Tactics Press (and I highly recommend that you subscribe to their publications, they are a solid and interesting publishing house) which just happened to profile the Independence Class ships on p68-70 of their July – August issue. Some highlights:

They are controversial because of their limited basic armament and expensive construction costs. Senior naval leaders argue the mission flexibility and extensive automation provide a vast array of capabilities with fewer personnel and platforms than traditional designs. Construction and operating costs dominate budget discussions and headlines because they come ‘up front’. Today, however, personnel costs constitute 62% of the annual Department of Defense Budget.

While I am a military history enthusiast I am not an expert in systems design and cannot add a lot of value to the controversy of whether or not the Independence Class is an effective combat ship for the money (for actual analysis see the points by Trent Telenko over at Chicago Boyz his insights are first rate and amazing). However, I have years of experience with the secondary point of this article, which is the long term benefits of automation and disruption on areas of the economy which have traditionally been (primarily) served through manual of semi-automated methods.

When you are a large entity like the US Navy, you are making some high level calculations on a strategic level. In general:

1) you need to understand your mission

3) you need to recognize that change is relentless and you are anticipating the NEXT war, not the last war (i.e. a “future state”)

The Navy faces the same challenges of disruption as the rest of the economy. The key themes of disruption drive AUTOMATION and SOFTWARE OVER HARDWARE and REAL TIME RESPONSE. In the future there won’t be hours of notice and long battles – there will be attacks from automated systems that will demand a response in milliseconds. The traditional “call to action stations” where sailors jump up from their bunks and man the weaponry cannot respond in time to these sorts of attacks. It is impossible.

The future of automation is inevitable. And yet, the military overall is spending 62% of their funding on personnel to effectively do manual tasks or be a man / machine interface. The military has to work quickly to phase out manual effort whenever possible and move to an automated solution that can 1) respond to real time threats 2) more importantly, be upgraded continuously via software and take advantage of ever-increasing powers of computational hardware.

I can already hear the “corner case” objections of specific jobs that will require “boots on the ground”. Absolutely soldiers will be needed to take and hold ground and deal with civilians and other missions – but many of the duties already done by soldiers from sentry duty to manning weapons can already be done more effectively by machines, especially when those machines are funded from tech savvy groups like the NSA rather than what you or I could buy off the shelf (like a Tesla). The “optimal” funding level, over time, probably is 70% machines / automation / real time and 30% staffing. The entire model has to be re-done in order to win on the types of real-time combat and missions that our military will face in the future.

Another giant but rarely thought of element is that weapon systems with less (or ideally zero) humans can be reconfigured into much more cost-effective and resilient systems. Much of the space on ships is for people and when people are killed or wounded the ship becomes ineffective. And yet the elimination or massive reduction in staff lets you create a much smaller footprint per square foot of killing power or weaponry and it can be designed with autonomous systems so that it can fight until it is utterly destroyed. Unlike TV or in the movies, ships and tanks and teams do not typically fight to the last man but systems do; and ships and teams that can’t move fast or have significant amount of wounded or killed team members can be forced to surrender.

The US navy is attempting to take on these challenges with this class of ships. Whether or not it is ultimately successful in creating cost-effective, automated and resilient weapons systems within the limits of available funding will determine whether or not they win or lose in future wars. it is as simple as that. Adding sailors to non-automated functions doesn’t achieve these future goals and will consume available funding in an endless make-work project.