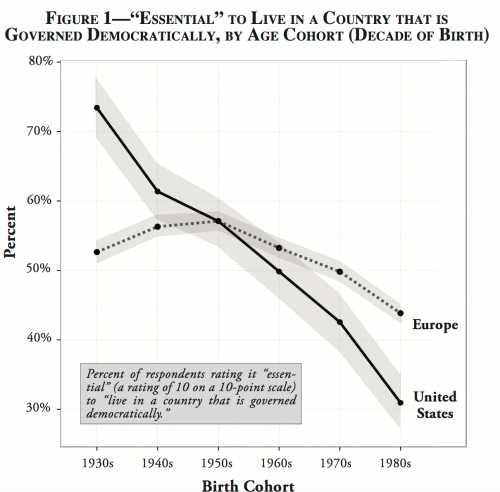 Martin Wolf, writing in the Financial Times, displayed the above graph, which is taken from this article in the Journal of Democracy.

After seeing this graph, I was going to put the title “Absolutely Terrifying” on this post.  But when looking at survey data, I like to dig into the source information a bit and look at the wording of the actual questions asked.  This data comes from something called the World Values Survey, and the specific question is:

How important is it for you to live in a country that is governed democratically? On this scale where 1 means it is “not at all important” and 10 means “absolutely important” what position would you choose?

I wondered how the results would look if I added the “9”  answers, one notch below “absolutely important”, to those who gave the highest possible importance answer…then did the same thing when adding the “8” respondents.  Here’s what I got (US data only), summarized.

(There have been six “waves” of the World Values Survey; I used only the most recent one, which probably explains why my numbers for the “absolutely important” category are slightly different from those shown in the graph.  The data is openly available here, and the display and crosstab toolset is very easy to use.)

So the results are slightly less-alarming than they appeared at first glance, which is why I changed the title of this post from “Absolutely Terrifying” to “Pretty Scary.”  Still, 40% is less than half, and the indication that only 40% of the 1980s cohort value democracy as either “maximally important,” or one step down from that, should be of considerable concern.