I visited Portland, Oregon on business a few weeks ago.  I had a spare afternoon and after a workout I decided to give myself a walking tour of the area.  It was mostly nice, with a few seedy places in the downtown area.  As I was walking I came upon this bar, the Satyricon (Photo credit here). 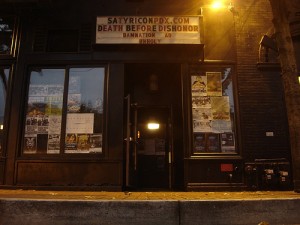 In and of itself it is not an impressive place, it is a rock club like so many others.  What made me stop in my tracks was the fact that by total chance I had happened upon a place that I partied at some 15 years ago.  I paused and stared at the outside of the club (it was the middle of the day) for five or ten minutes as many memories washed over me.

In my younger days the weekends were about only a very few things.  Sports, booze, women, music and booze.  I suppose I was like most men in their twenties, frequenting clubs and bars and sporting events, having fun and blowing off steam.  I let off a lot of steam in the Satyricon that night a decade and a half ago, seeing the Poster Children play.  The volume inside was absolutely sonic.  I remember talking to the band members before the show.  I had seen the Kids (what we always called the Poster Children) play at least a dozen times before at places like the old Mabel’s in Champaign, IL where I went to school (Go Illini!) and in Chicago at the Metro.  I had even seen the Kids play at a few house parties WAY back in the day.

I remember getting into mosh pits, and getting a bloody nose when the Kids opened up for 7 Seconds at Mabel’s.  Here is the legendary Seven Seconds.

Yep, that looked about right.

And here is the Poster Children – from 2007!  They are still doing it, albeit on a much more part time basis than before.

All of this is a long winded way to say that boy are those days long gone.  Now I am almost 40 and can’t fathom myself at a Seven Seconds show (or a show like it).  But I would certainly go see the Kids if they come to town – and it is known that they like Madison.  I saw them here a few years ago.  No mosh pit if you were going to bring it up.

I almost have regrets sometimes about all the time and money I spent doing these activities.  But other times, like a few weeks ago when I accidentally strolled by the Satryicon, I just stand there and smile.