As I was walking at Grand and LaSalle today doing some Christmas shopping the guy next to me pointed out something in the snow right next to us. It was the nozzle from a gas station that someone had apparently driven off with and which ended up here. If you look in the picture to the upper right you can see the BP gas station from whence it came… 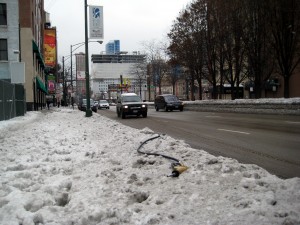 River North is a very wealthy area of Chicago, but since we are near downtown and filled with (well meaning) tourists, our neighborhood is filled with the homeless, bums and panhandlers. Here is a helpful schematic post that I created to identify their various types. That BP gas station is notorious – I won’t go there at all if I can possibly avoid it, because they so aggressively try to pump your gas for you and you can’t really get away from them if you have to stand there while your tank is filling.

The situation was documented when an off duty policeman was stabbed by a homeless person while filling his gas tank at that very station. Here is a link to a story about that stabbing. You’d figure that an off duty policeman is likely to be an intimidating figure, so it would be much worse if you were a woman or elderly.

Or it could have been a drive off, or someone who is absent minded. Either way I’d recommend that you find a different gas station.

4 thoughts on “Anywhere Else Likely A Drive Off…”