In the “efficient markets” hypothesis, all available information is factored into the stock price, making attempts to “beat the market” by selecting your own stocks a fool’s errand. Index funds, which were originally stock mutual funds, such as those at Vanguard, not only attempt to mimic rather than beat the index, they also sport much lower expenses. Thus even if the performance was the same for an index as a stock picker, the index would win with costs as low as 0.2% / year as opposed to 1% – 2% / year for managed funds. One advantage that remained of a stock selection methodology over mutual funds was related to taxes – individual stocks were definitely more tax efficient if handled correctly; now index ETF’s have erased that lead.

Of course, theories don’t always work in the real world, as the recent financial meltdown attests, when AAA rated financial instruments took significant losses. In a similar vein, those in favor of active stock selection could always point to a few candidates to make their cases. One candidate was Bill Miller, head of the Legg Mason Value Trust, who beat the S&P 500 for 15 consecutive years. 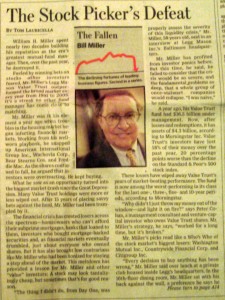 While Bill Miller may have been the “poster boy” for those that point to active stock pickers, he was a reticent candidate. He even said that a lot of his “streak” was due to timing on the calendar and didn’t strut around like a world-beater. Thus I didn’t take much pleasure in the this article…

Bill Miller, whose Legg Mason Value Trust achieved the unlikely feat of beating the S&P 500-stock index for 15 consecutive years, has become the fund world’s punching bag. So far this year, the fund is down a devastating 56 percent on account of bad bets on stocks including AIG, Washington Mutual, and Freddie Mac. This horrific year (combined with lackluster results in 2006 and 2007) has banished Legg Mason’s crown jewel to the ranks of the worst-performing mutual funds not only for the year, but for all standard periods of measurement.

Actively managed funds did terribly in the current stock market environment, and index funds also fared poorly. The delta between the two is the “negative alpha” of active management (sorry, not everyone will get that, but I find it a bit funny) as well as the increased expenses of the actively managed fund over the index (it may be up to 6x bigger, as they say in the Vanguard adds, but unfortunately that is only a small percentage of the overall loss).

1) you probably are going to come in worse than your index performance
2) you will almost certainly pay higher fees
3) by selecting a mutual fund over an ETF, you are sacrificing tax efficiency

Bill Miller is among the last of the “index beaters”. The marketing departments for actively managed mutual funds are going to have to think hard to make this one shine…