So and aside from the outage at Chicagoboyz which deep-sixed the site for the best part of a week, I myself was also sidelined at about the same time by another issue: the completion of a project. That is, the eight months-long project to brew up another human being; this one being my Grandson Unit, currently known as Wee Jamie. He had to be delivered a week ago Thursday, through the medium of a hastily scheduled C-section, as an intermittent constriction of the umbilical cord, which delivered all nourishment and oxygen to him in the womb-without-a-view had occurred yet again. The perinatal experts at the clinic where the Daughter Unit was being seen decided that better deliver now than risk problems later. This was six days short of the day that the Daughter Unit’s OB-Gyn had initially decided should be Wee Jamie’s Date of Delivery (again somewhat short of her 40-week human gestational period, which would have been at the end of the first week in June) … well, all of that was rescheduled because of that concern. The Daughter Unit is 41, so a degree of concern was justifiably merited.

So Wee Jamie was delivered, howling to beat the band in his justifiable outrage at being hauled suddenly, brutally, and willy-nilly out of his warm, dark, comfortable if slightly cramped environment, into a world of bright lights, loud noises and sudden cold. He is now fully entitled to eventually go out of this world as he came into it: screaming and covered in someone elses’ blood.

Which I know because I was there in the operating room, as the Daughter Unit’s support person. I had a camera, and a nice seat on a metal stool on the far side of the screen set up across the operating table. The anesthetist on the side of the screen next to me told me when I should stand up and prime the camera to grab the first images of Jamie. I got two lovely if slightly gross pictures of him being extracted, and another on the table being evaluated by the NICU team, which will eventually be blackmail materiel when he becomes an obnoxious teenager. Honestly, I am mostly glad for being able to be there, to see him, then to hold the Daughter Unit’s hand, and not to come over faint myself, which was a distinct possibility. (In Spain, when we had to have certain of the pets seen to at the local vets … I had to hold them for the examination, and then again if there was anything severely medical being done. Eventually this process made me come over faint; the smell and the blood and all. I was embarrassed over this tendency, as I am not otherwise the fainting sort.)

So, the Daughter Unit and I have our hostage to fortune, in the production of Jamie, the Grandson Unit. An observation: The Daughter Unit’s medical care (and Jamie’s) was covered by Medicaid, by the end of the year to be converted to the VA as a veteran, although Jamie’s will continue to be Medicaid until he is five, by which time the Daughter Unit hopes that as a real estate agent, she will be doing well enough to afford good insurance. (She is erratically employed as a researcher for a local company and draws VA disability.) Those fans of the British and Canadian public health organizations appear to be firmly convinced that without a similar organization in the US, Americans who can’t pay out a bomb for primary health care just die in droves and agony on the sidewalks and streets. (The capitalist American medical health system is so brutal and uncaring, dontcha know! Only the rich and insured can get health care. I blow a derisive raspberry in their direction.)

Jamie was delivered at one of the largest and most extensive hospitals in town, mostly because the Daughter Unit’s very busy designated OB had privileges there, and it was a ten-minute jaunt from her offices anyway. There might very well be luxury birthing suites for high-rolling parents somewhere in the Medical Center’s main campus Methodist hospital, but I doubt it; the Daughter Unit’s delivery was organized in a brisk and efficient manner, the attending nurses were caring and attentive, her room afterwards was in a quiet and serviceable antenatal ward, as the regular postnatal rooms had been taken up by a rush of deliveries. (Yes, I would guess that a lot of couples spent last year’s lockdowns in a productive manner.) I did not note any ambulances stacked up outside the emergency room, and certainly no patients on stretchers lined up in the corridors awaiting rooms or medical attention, as seems to be the custom at many National Health Service clinics in Britain.

Jamie’s pediatrician practice has privileges at the second-most-extensive hospital organization in town: the Baptist Hospital in the Stone Oak area. He had to have a test at a pediatric testing center there, after his first pediatric appointment, an activity which had been just recently was moved from adjacent to the emergency room where we were first sent, to a location at the end of a long trek through the Skinner Box corridors of their extensive establishment. The senior nurse in the pediatric testing center was extremely irate that weary and stressed-out new mothers were being mistakenly sent all that long way and called up a wheelchair and an attendant nurse for the Daughter Unit, to take her farther along, to the office where it was necessary to check in – another long trek. Then afterwards, that nurse advised me where to go around to park closer in, and personally accompanied the Daughter Unit and Wee Jamie out the nearest door to it.

This excursion took me twice through the emergency room … which I noted was mostly unoccupied. No traffic in the waiting room, no patients lined up along the corridors … well, that part of town is notoriously upper-class and law-abiding. And it was a weekday afternoon anyway. So, I can say after this week that I know have some personal experience in three of the four big hospital systems in San Antonio: the Methodist, the Baptist, and the military. (The Catholics have Santa Rosa … gee, can’t the Lutherans even get a look-in, in this town?)

A bonus – the towering cuteness that is the Grandson Unit. 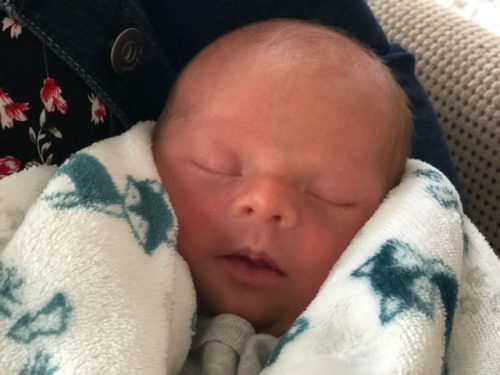 18 thoughts on “The Completion of a New Project”