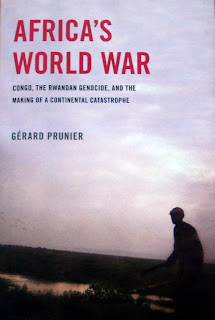 Africa’s World War – Congo, The Rwandan Genocide, and the Making of a Continental Catastrophe
By Gerard Prunier

I am not an expert on African military affairs but have a high degree of interest in the conflict in the Democratic Republic of the Congo, which many have called “Africa’s World War”. I wrote this post as I started researching this topic and will write additional posts as I learn more about the topic. I hope that this is as interesting to you as it has proven to be to me.

Virtually everyone has heard about the Rwandan genocide in 1994 in which an estimated 800,000 Tutsi were killed by Hutu in a bloody uprising, while the UN troops stationed nearby were unable (and really didn’t even attempt) to stop the slaughter. Many books have been written on this topic, and a movie called “Hotel Rwanda” was made starring Don Cheadle that brought the event to an even wider audience.

After the genocide, Tutsis in neighboring countries including Zaire (now renamed the Democratic Republic of the Congo or DRC) and Uganda poured into the country and took it over, causing the Hutu leadership to retreat out of the country and into neighboring nations in refugee camps. A lot of this is generally known, since it logically follows that 1) there was a genocide of the Tutsis by the Hutus 2) the Tutsis came back into the country, took over, and kicked the Hutu leaders out. To many Westerners, in a way, this is a relatively neat closure to the story.

After this, the story gets less well known. From my perspective I was aware that the despot Mobutu in DRC was on his last legs but was astounded at how fast tiny Rwanda was able to cross the country and install the aged Laurent Kabila in 1996 as ruler of the DRC. DRC has 60 million people, and Rwanda has only 8 million, and the distances are vast (DRC is about 1/2 as big as the United States, with virtually no infrastructure for transport) so it seemed as if tiny David slayed mighty Goliath. Uganda, which was under new and charismatic leadership (after the horrors of Idi Amin) also played a big part in the victory. These parts of the story still generally tracked in the Western reader’s imagination as in sync. You had the genocide and reaction to the genocide, and then you saw an aging despot fall to the new Tutsi leadership in Rwanda and the fresh leaders of Uganda.

After that, the story gets murkier and harder to understand if you are only casually following developments. I do remember that the happiness that was greeted with the ouster of Mobutu was met with apprehension as the regime under Laurent Kabila seemed to be ineffective in running the country, which has vast mineral wealth, nor in dealing with international investors or the UN which are needed to finance any type of reconstruction. This seemed to develop over a few years. In 1998, Laurent Kabila seemed to have a falling out with his Rwandan (Tutsi) and Ugandan allies that installed him in power and a confused war broke out. As a semi-casual follower, I couldn’t really make sense of what was happening and who was on what side.

Rwanda is on the East side of the vast country – the capital of the DRC is Kinshasa which is on the farthest West side of the country, near Angola and the Congo (not to be confused with DRC). Rwandan forces were able to quickly reconquer the East but they tried to take the capital by storm with attackers that were flown in and took up with local elements. The attack on Kinshasa really seemed like something out of an action film or something; only a few Rwandans plus their Allies attacking a city of 9 million right next to their enemies. President Laurent Kabila evacuated into the neighboring Congo (their capital Brazzaville is right across the river next door) which must have meant that he felt at risk. This “blitzkrieg” failed, although it seemed awfully audacious and who knows what was possible when a country of 8 million had previously felled a giant.

After the failure to take Kinshasa, the casual observer such as myself doesn’t really know what happened. Other countries have intervened, even though many of them seem to be burdened with their own significant problems such as insurgencies and broken economies. Some sort of war seems to occur over the next few years in the center of the country, with Laurent Kabila holding the West and the Rwandans holding the East. The UN is in the middle of it all, but doesn’t seem to be effective in stopping the fighting, not surprising since the country is so vast and the US isn’t involved (it is more difficult for the other UN countries to project power, that isn’t a pro-US comment).

After a few years of confused news, in early 2001, Laurent Kabila was assassinated. His son, Joseph Kabila, who was young (only 29) assumed power with low expectations. Surprisingly enough, he actually seemed to rally the country and tried to improve relations with the UN and with foreign businesses. In 2002 a cease-fire occurred and the country seemed to be on the mend. In 2006 Joseph Kabila actually won an election to be president, beating Bemba in a run-off.

Over the last few years I have heard that the situation in the Congo is the worst humanitarian disaster and largest conflict since world war two, but I hadn’t been able to start to judge the validity of that statement.

Based on the scale and size of this historical event, I wanted to learn more, especially enough to judge it against the WW2 claim (although it is not compared against WW2 per-se, just everything else since that war) and also the claim that it is Africa’s “world war”.

The book appears to be extremely well documented. The book starts out with a long list of acronyms and terms in foreign languages. Once you start to read the book it is immediately apparent why that type of glossary is necessary – you need to keep referring back to the front to keep all the rebel and government groups straight, along with the geography of the region which significantly impacts the fighting.

The book is organized by period, starting after the Rwandan genocide in 1994 and working up to roughly 2006. The periods generally correspond to the different phases of the war after the initial genocide – wikipedia links are also included if you’d like a brief summary – they are the

The last 1/3 of the book consists of detailed footnotes. Prunier contains a lot of detail in the footnotes to support his positions, and they represent very interesting reading.

The book is highly recommended. I looked at sources online and reviews and some were critical of Prunier, saying that he was anti-US or pro-French or pro-Hutu (and against the Tutsis). In my opinion as a voracious reader of history Prunier has attempted to cover a massive historical event with relative even-handedness. There are no events on this scale that can be covered in a single book without dissent, in my opinion.

One reason for the vitriol is that there are conclusions that the reader can come to that are generally at odds with the popular perception of the war. In my opinion, these conclusions are:

1) The Rwandan Tutsis have much blood on their hands – it is incontrovertible that they were the victims of a massive genocide, and that they needed to intervene to protect themselves. However, the initial attacks on the Hutu camps provoked casualties in the hundreds of thousands or possibly nearer 1 million. It is not clear that they could have behaved in a way that led to less killing of innocents and civilians. Beyond the initial battle of the camps, the subsequent wars in the Congo show less and less “pre-emptive force” justification and seem to be a campaign to create “buffer zones” and loot the mineral resources of the DRC
2) The international community was mostly ineffective – from the initial killings in 1994 in Rwanda to later peacekeeping operations the UN was militarily weak and may have actually aided and abetted the first and second Congo wars by providing financial aid to Uganda and Rwanda, which enabled their economies to continue functioning while pursuing war. While no one is that surprised at the ineffectiveness of the UN military response, the fact that many Western countries and other organizations were providing financial aid to combatants that allowed the war to continue is much more damning
3) DRC is a “shell” state – even though there are 60 million or so inhabitants they seem almost completely incapable of determining their own destiny. Angola “saved” Kinshasa during the second war by deploying helicopter gunships and heavy weapons along with direct forces, against the forces of Rwanda and Uganda. How tiny Rwanda and Uganda are able to conduct a war when the country is against them (they are not popular in the DRC) on such shoe string forces is simply amazing – it would be like 5,000 people invading the UK and conducting a war in the midst of a sea of hostile civilians and WINNING.

I will write more about this topic as I research it more. There is a lot of material out there and I am attempting to make sense of it. I hope that this summary is useful and that it inspires you to learn more about this conflict and reach your own conclusions. Given the scale of this event, an educated person who wants to be knowledgeable about history should treat it seriously.