HISTORICAL VIEWS OF THE TRANSMISSION GRID

Upgrading the transmission grid would have many advantages to the United States. Many of the lines are older and don’t have much spare capacity, or they are less efficient than new modern designs and waste less electricity along the way.

The transmission grid also does not connect to where the “new” sources of generation may lie. For example, the grid was designed to match fossil fuel / nuclear generating stations to major population centers, or to bring power from large hydroelectric facilities to the cities, as well. In some instances the grid was designed to “interconnect” major power companies to one another, such as on the East Coast.

As you can imagine, these reasons for building the original grid aren’t ready-made for new, “renewable” sources of energy. If you want to connect up a wind farm or a set of solar panels in the desert, it doesn’t matter how much power you can generate unless it can be brought onto the grid and transmitted to the cities (without excessive line loss).

The value of the transmission grid is infinite and unmeasurable, because we could never obtain those rights-of-way to rebuild them at any price

Since the greens and democrats have come into power energy topics are back in vogue. For a little while there was a romance with nuclear power (which will never materialize, see here) and now we see a wave of interest in transmission. Now that the democrats have to govern the country they realize that they have to actually govern and not just throw stones at a republican administration and that these are issues that require policy and resolution.

This map below shows a proposed transmission line in California (from The Economist dated February 14, 2009), designed to bring power from the desert where solar cells will be installed to the rest of the line and major cities. Note that this line is PROPOSED – this writer and most readers will likely be deceased before this line ever is accepted, built, and comes into service. 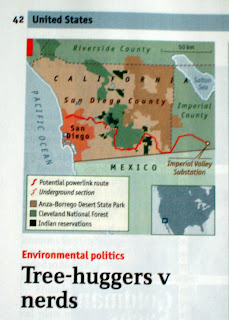 But you can see from the PROPOSED line how many compromises are needed in the current political climate. The line has to snake around any sort of park or Indian tribal area. The line is clearly not the most efficient route from point A to point B, and since you pay for transmission lines by the mile, this is going to make the cost of the line much higher than it would be otherwise.

Not shown is all the money that must have been spent on lawyers and lobbyists just to get to this pathetic compromise. Siting a line like this takes years and years of studies, and at any step along the way some judge or lawyer or politician can shut it down for almost any reason.

The most famous example of this is an undersea electric cable that connects near New York City – the line was approved, built, and ready for use when a judge shut it down and now it lies unused, in an area that desperately needs the power.

What you will see is something like this photo that I was able to snap (without killing myself) while driving near Chicago. The photo shows a new, modernized transmission line being built alongside an interstate, taking the place of an older line. This sort of transmission upgrade is possible, because there are no “rights of way” issues to resolve – the utility is just replacing existing infrastructure. 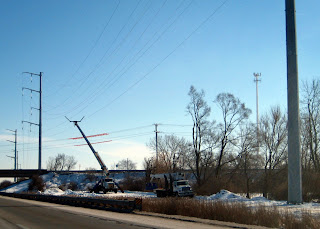 This is the only “shovel ready” infrastructure possible to deal with our transmission crisis, and ironically it generally does nothing to push forward the idea of using renewable power because it doesn’t expand the grid to connect these new energy sources.

In any case the current administration would have to be in power for decades in order to make an appreciable dent in our electricity transmission infrastructure because of the infinitely long siting process needed for these new lines, which can easily take 10 years of effort. And note that this legal process doesn’t improve the line plans – it just makes them worse, causing detours, compromises, and raising the cost.

While there are other critical issues to resolve, including incentivizing the power companies to build these systems and finding a way to finance the construction, the most difficult problem relates to the incredible legal thicket put up in the United States and the power of lobbying organizations and politicians to put a stop to these types of projects, or delay them infinitely.

Don’t count on any of these issues being solved any time soon – they aren’t even on the radar of the current administration, and in fact represent a core element of their constituency. You’ll see them take on the teachers’ unions before this.