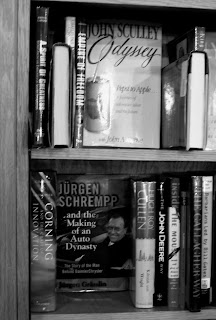 I enjoy going to used book stores and could probably just sit in there day and night, perusing the selections. Recently I was in the “After-Words” book store in Chicago and picked up some interesting books, and saw these used books on the shelf that made me laugh out loud.

The first book is about Jurgen Schrempp, the former CEO of Daimler, who presided over the disastrous acquisition of Chrysler in the United States. Of course the book is the usual puff-piece and it is hilarious given the complete value destruction caused by this merger. Eventually, Daimler basically gave away Chrysler to Cerberus, the private equity firm, which continues to run it into the ground to this day. Even now I can’t imagine how anyone thought the Mercedes / Chrysler merger was a good idea. Don’t forget that Schrempp also presided over the collapse of Fokker, the Dutch airplane maker (remember those WW1 planes?). It is unclear what he ever did to warrant such a book and its existence is pretty ludicrous.

The second book is about John Sculley, who came on in the 80’s and into the early 90’s to Apple, famously bringing his marketing ideas from Pepsi into the computer firm. At the time Apple was having problems and it seemed like some new leadership would help; but in the end he left in a cloud and is now completely and utterly forgotten. Steve Jobs is seen today as a genius, the fore-runner of the iPod and now the iPhone, along with the continually evolving and chic line of Apple computers. This puff piece too is a relic and hilarious – look at John Sculley’s bio on Wikipedia – by the end he is in a 2 man firm that is going nowhere. He is a famous example of the “Peter Principle” where a man who invented the Pepsi Challenge (a very good idea) peaked and then went into a long slow decline.

The fact that these two books are fronting the business section at After-Words either means the clerks have no idea what they are doing or have a supremely intuitive sense of irony.