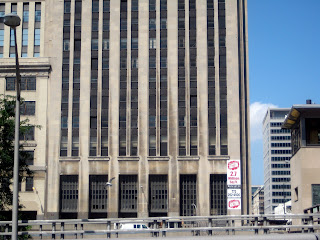 How you can tell the difference between how the GOVERNMENT operates (with your tax dollars at risk) and how an INDIVIDUAL would choose, if it were their own money? Here is a classic example.

The old US post office in Chicago is a giant structure rising over I-290 (the main highway into the city coming in from the West) that has been abandoned since 1995, when a new post office was built.

While the Chicago real estate market absolutely boomed through the period from perhaps 2000 through the 2007-8 crash, the US government was unable to execute a deal of any sort. There were various plans to do so, but they didn’t reach a deal, and anyone who knows a government bureaucrat knows it is better to be “safe than sorry”. If the terms weren’t perfect and there was some controversy, just let it lapse, and who cares, your pay is the same, either way.

So here we are – in mid 2009 – when the commercial real estate market is at an absolute and total nadir. I am not a real estate expert but I would have to say that it is the worst market, timing wise, in my entire lifetime.

So NOW, in the worst market in decades, perhaps since the Great Depression, the US Government is choosing to auction off this post office building. Here is a link to the auction site. The suggested minimum bid is $300,000, when they were entertaining offers as high as $300 million per this Chicago Tribune article that were never consummated.

While I don’t know what they will get for the building (the auction is in late August) anyone with even the most basic sense of the real estate market will tell you that they are executing this auction at the worst time possible.

Ask yourself this question – will the government hold anyone accountable for the lost taxpayer revenues between what the building WOULD have reaped had they been able to sell it ANYTIME between 1995 and the real estate crash? Of course not. They don’t actually care enough about your dollars to judge performance on that basis.

And this is why putting more assets and activities in the hands of the US government will inevitably lead to waste and lost opportunities on an ever grander scale.

13 thoughts on “Your (Wasted) Federal Tax Dollars At Work”