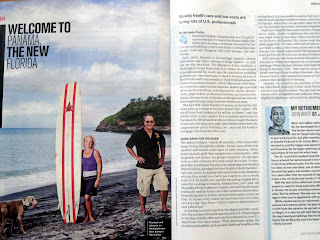 PANAMA AND ESCAPING HIGH US COSTS

One element that is generally not well considered in our health care debate is the fact that individuals will react (over time) to market signals and attempt to make rational financial decisions. A recent article from Business Week called “Panama – It’s the New Florida” with the tag line

is useful to provide some background on this issue.

This article uses hyperbole – the total population of Panama is a bit over 3 million and U.S. residents are a small fraction of that total, while Florida has a population of 18 million – but the thinking is spot on, long term.

Researching rates in Seattle, she found that nurses run $25 an hour. In Panama City, where she has lived since 2007, they cost $25 a day.

Going overseas for medical work has a long tradition; generally it was the wealthy from Middle Eastern countries who came to Europe or the USA to receive advanced treatments. In recent years citizens of many nations featuring socialized medicine such as Canada travel overseas or to the United States to bypass waiting lists for critical procedures.

The most likely individuals to leave based on economics are those who retire early (like those in the article) and are ineligible for Medicare, which starts at 65. According to this survey (which is quite interesting, I recommend you click through and read it) – here are some numbers based on 2006 premiums and the survey was published in December, 2007:

HOWEVER, the average policy cost varies significantly, by state. The study doesn’t break out what a family policy for ages 55-59 or 60-64 would be in a high cost state, so I am going to “guesstimate”.

The average policy cost overall for a family is $5799 / year (across all age ranges). The lowest state is about 50% of the total (it was Wisconsin), and even throwing out Massachusetts (which had a change in 2007) the next highest was New York at about 250% of the average.

Thus if you extrapolate your age AND the fact that you come from a high cost state, you can figure the following:

Let’s say you retire at 55 and are in good health and live in New York, where the weather is crappy and the cost of living is high (since I live in Chicago and the weather is even crappier, I can say that). If you are in decent health, why pay $20,000 / year when you could go away and “pay as you go” somewhere like Panama where they have decent health care options. Once you are over 65 and your health starts declining (and getting more expensive), you could always move back to the US and get on Medicare at which point you won’t care much about the costs.

IMPACT OF BEHAVIOR ON FINANCIAL VIABILITY

For any kind of “all-in” group health insurance scheme to work financially, there has to be subsidization of the poor from the wealthy. The system needs the high earners to contribute more than they consume, especially if they are relatively healthy and thus not consuming expensive services.

However, these high income professionals who are NOT utilizing health benefits to an excessive degree would be ABSOLUTELY the ones most likely to look for alternatives to avoid being a captive individual subsidizing the system. This Panama article, while it does not focus on health care exclusively, is pointing out exactly those most likely to leave.

As for the tax impact, at a high level if you are self-employed you can deduct your health insurance premiums against your gross income (which reduces it effectively by your overall tax rate, say 30%) but if you are not self employed then you can only deduct it to the extent that it exceeds 7.5% of your adjusted gross income.

Thus estimates that show the US health care costs (and revenues) and neglect to take into account that the most mobile and wealthy citizens have CHOICES of where to live will not predict accurately what will in fact happen.

While US citizens may not typically migrate overseas, this is an established solution to high taxes in other countries. The UK, for instance, has always had a large population outflow of retirees, especially to Spain. Much of this is due to the fact that UK taxes are punishing (and the weather isn’t so great) and UK citizens are adventurous enough to leave the country of their birth in order to improve their standard of living.

Countries outside the US also will respond to these opportunities. Panama and Costa Rica are attempting to be more friendly to US retirees because they know that they represent an opportunity for their economy. If health care can be brought up somewhere close to US standards (basically by walling off poorer locals or migrants) for at least preventative and maintenance care (if not for high tech procedures) then they will be able to draw in those individuals who can bring their wealth overseas and also bask in the beautiful weather and scenery.

I remember when I was traveling in Australia once and sitting on a plane next to an elderly gentleman and he looked over at me and asked me if I was emigrating. I honestly was taken aback – I had never thought about moving overseas. Perhaps the US citizenry will start taking a wider view of living outside of the USA if taxes and regulations become too punishing.