This panel below is from a the web comic “Escape From Terra”.  It’s a pretty good hard science fiction story which examines how a libertarian/anarchist society might function in space. The centeral conflict revolves around those in space trying to keep their freedoms in the face of ever-present encroachment from the statist world-government of Earth (it’s modelled on the EU).

In the story, two pilots deliver a chunk of a comet to a self-made billionaire who is hiding out on his own little artificial habitat. The billionaire has to hide because he keeps creating disruptive technologies that empower ordinary people to live their lives independently of the state, and the government doesn’t like that — to the point it wants to see him dead.

In this panel, the billionaire explains his motivations: 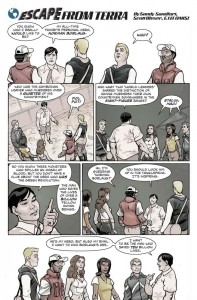 Every geek in the world should strive to emulate the late Norman Borlaug. Geeks and business people have done more good for the world than all the politicians and wannabe-politicians combined.

In 1969, the people who changed the world for the better weren’t left-wing, pro-communist-victory “activists” but the engineers and scientists who landed men on the moon and fired up the first two nodes of the Internet. People who view “progress” in terms of politics first and foremost have done far more harm than good. Yet, as the comic points out, we know their names while the names of those who made our lives so much better are erased from common history .

People in the developed world (and increasingly the rest of the world as well) have lives of physical comfort, social equality and political freedom mostly because of the efforts of geeks like Borlaug who use knowledge and hard work to turn dirt and water into happiness.

When artists whip out posters of people like Borloug instead of the glorious leader du jour, we will know we have become a truly wise civilization.