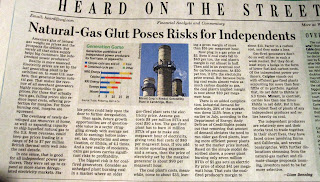 The US power generation portfolio is primarily made up of nuclear power, coal, and natural gas. Hydroelectric can be significant in parts of the country (and in power coming from Canada) but no one is even thinking of adding new hydro assets (in fact they talk about tearing down the dams we have today). Despite all you read in the press, “alternative” energy including solar and wind energy makes up a minuscule portion of total US generation (and almost none of the critical “base load” generation which is reliable).

In many posts over the years I have written about the media myths about power – one of the most prevalent is that nuclear power is enjoying a “renaissance” – nothing could be further from the truth. You can click on the sidebar (here) to view my previous posts on this topic. Nothing of substance (i.e. shovels turning dirt, committed orders occurring) is happening in the US; even in Europe where the revolution is also occurring one of the few new Western nuclear plants under construction (in Finland) is plagued by cost overruns and difficulties – from this NY Times article:

Areva, a French nuclear construction company, said this week that its project to build the world’s most powerful reactor remained mired in delays and was over-budget by 2.3 billion euros, or about $3.3 billion. The price tag of the plant in Olkiluoto, Finland — the first of a fleet of so-called evolutionary power reactors that Areva foresees building in coming years — was about $4.3 billion in 2003 and costs have steadily increased. The reactor was meant to have gone online early this summer but Areva no longer is committing to any dates for its completion.

With all of these difficulties in building coal or nuclear plants, the industry has turned almost exclusively to natural gas in order to provide extra capacity for the US. Natural gas plants are relatively cheap to build and easy to site; they emit less greenhouse gases than coal plants – but their down side is that with the price of natural gas up near $10 – $14 / unit (as anyone who uses natural gas to heat their home can attest), these plants are much more expensive to run. In addition, US supplies of natural gas have been limited (by exploration constraints and lack of LNG facilities and pipelines to get the gas where it is needed).

Often in this blog I criticize journalists for their poor understanding of business concepts; but I need to instead praise the Wall Street Journal for an excellent and succinct article on natural gas on Monday, October 5th.

The article is titled “Natural-Gas Glut Posts Risks for Independents” and is about the impact of lower natural gas prices on independent power producers (traditionally known as IPP’s). This article is on the back page of the investing section, called “Heard on the Street”. The articles here assume that the reader has a pretty in depth knowledge level of what is being discussed and as such get right to the point.

The article is specifically focused on the IPP’s and how the market is perceiving them typically as linked companies and giving them similar values; however, the IPP’s predominantly fueled by natural gas (particularly Calpine) are different from the other IPP’s and should be viewed uniquely by investors.

The article starts with the critical background element – natural gas prices have fallen from their high of $14 / unit to around $4 / unit or so. If prices were to stay at this level, natural gas would be competitive with coal fired units, especially if coal units were hit with a cap and trade tax, as well.

Then the journalist of this article, Liam Denning, shows that he has a pretty decent understanding of what really happens in the market. The “market clearing price” for a market is set by the last generating unit that turns on – which is natural gas. Per the article, if the cost / BTU of gas means that the price of the natural gas units is $80 then you add in a bit of extra costs and come up with $90 / MWH, that will be the price that everyone selling in to the spot (that day’s) energy market receives for their “juice”.

But if the price of natural gas at around current costs would be maybe $50 / MWH, meaning that existing coal plants could become un-economic if they are hit with a “cap and trade” levy and thus the IPP’s on the list with coal would benefit from natural gas but get hurt on the coal side.

Regardless of what happens to the IPP’s, who make up a relatively small percentage of the US energy market (when you factor in the major utilities, public utilities, and even Federal entities like the TVA), the decline in the price of natural gas has changed the pricing for energy to a significant extent. Natural gas prices have fallen for a few reasons 1) high prices of up to 3x and 4x current prices inspired drillers to bring new capacity on line in the USA 2) LNG plants which allow foreign countries to bring in supplies of liquified natural gas have been built and are up and running, so our capacity increases 3) pipelines have been built that allow the gas to get to where it is needed, mainly from the Rocky Mountains to the midwest and East coast.

Another element to factor in is the decrease in demand for electricity. The current recession has hammered industrial demand and given the industry respite from having to increase their overall peak.

It will be interesting to see if natural gas prices rise this winter if we have another harsh winter, or if the current pricing is going to stay for a more extended time. Gas prices also move based on the home heating market which takes up a significant portion of total demand, and is very seasonal (on the coldest days).

Hats off for a succinct and well written article that illuminates a key point on the role of natural gas as a “market clearing” price for electricity.