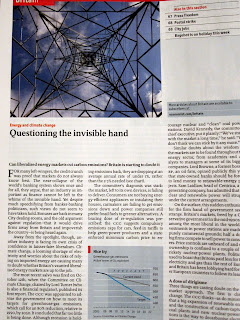 Recently I wrote about Britain and electricity and the fact that Britain isn’t bringing new capacity on line in time to stave off a looming crisis as older plants go out of service and electricity demand rises.

This article, titled “Questioning the invisible hand“, has the sub title “Can liberalized energy markets cut carbon emissions? Britain is starting to doubt it”.

The first myth is that Britain, like America, really “deregulated” or “liberalized” their markets. A better description would be that the markets are “regulated differently”.

In the old markets, utilities had a duty to plan for customer demand growth and re-invest in future capacity. Many of the deregulation schemes split off generation, transmission, and local energy distribution into separate companies, which is fine in theory because then each of these three components could be optimized. In many cases local citizens were given a “choice” of electricity providers at the distribution level, but these distribution companies still essentially utilized “legacy” transmission and generation assets.

The reason that these schemes were only partially deregulated is that 1) barriers in the market place ensured that it was difficult to build base load capacity of coal or nuclear power, meaning that the older units ruled the market 2) the spot price of generation was determined by gas fired units, which essentially meant that it fluctuated with the price of natural gas 3) building transmission is so onerous (getting permits, siting it) and funding is so uncertain that the grid was not significantly improved. What did happen is that price controls on generation were lifted and rates were capped, so for a decade or so there weren’t increases in the price of electricity from the generation side.

The committee’s diagnosis was stark: the market, left to its own devices, is failing to deliver (carbon reductions). Consumers are not buying energy-efficient appliances or insulating their houses… and power makers still prefer fossil fuels to greener alternatives.

Well of course consumers don’t do un-economic things – unless the price of electricity skyrockets, it doesn’t make sense to over invest in energy reduction. And as for the power companies, why would they invest in anything at all when they could just keep running their fully paid-for units until they keeled over; after all, it wasn’t their responsibility to plan for future generation anymore (that was left to the broken market).

Those that are obsessed with carbon gases have been touting nuclear power and renewable power, but of course 1) basically no nuclear plants will be built anywhere because of financial and regulatory uncertainty 2) renewable power is a money loser unless it is massively subsidized, which the generating companies aren’t going to do.

Thus now the politicians in Britain are apparently telling companies what to build and when, per the Economist. But it will be interesting to see how they can make a company build a nuclear reactor when this is essentially assigning them to bankruptcy and never ending legal and publicity battles with the looney left.

In the document they really started to figure it out though:

Low prices (for electricity) were as much a result of firms sweating their assets as of competition and ingenuity.

CLOSE, but no cigar. The REAL reading is that companies were able to keep prices down not only by sweating their assets, but not investing in the future (on the generation side, at least). When I was in the industry a “rule of thumb” is that you should reinvest capital equal to depreciation; else you were essentially winding down the business (of sorts). If you don’t reinvest in generation and are a generation company, you will have a massive windfall to your current investors. Not only that, but since there are big barriers to entry, as your asset base degrades, you will be able to charge MORE for what is left, making you probably just as profitable over all, since there isn’t anyone else out there with a base load nuclear or coal plant.

The mix of carbon limits and taxes and a busted deregulation scheme which encourages no investment in base load generation is just adding fuel to the fire that will rage when we start pulling the older base load units off line. Future rate payers will certainly curse us when they get the bills for paying for the future’s high cost electricity (a mix of broken base load plants and high cost renewables) while they pay exorbitant amounts to fund high cost new base load plants.

And shame on the Economist for focusing on carbon while the real issue is that the lights will go out unless something happens to build new base load power.

7 thoughts on “Britain and Electricity – Asking the Wrong Questions”