From the Daily Mail.

The biggest and most secretive gathering of ships in maritime history lies at anchor east of Singapore. Never before photographed, it is bigger than the U.S. and British navies combined but has no crew, no cargo and no destination – and is why your Christmas stocking may be on the light side this year.

It is so far off the beaten track that nobody ever really comes close, which is why these ships are here. The world’s ship owners and government economists would prefer you not to see this symbol of the depths of the plague still crippling the world’s economies. So they have been quietly retired to this equatorial backwater, to be maintained only by a handful of bored sailors. The skeleton crews are left alone to fend off the ever-present threats of piracy and collisions in the congested waters as the hulls gather rust and seaweed at what should be their busiest time of year. 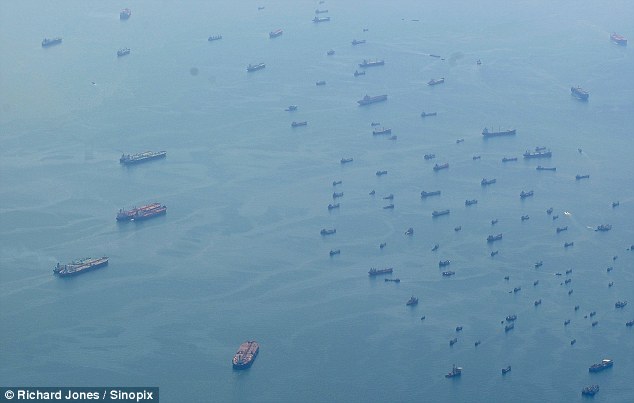 But then our initial skepticism towards Europe’s new money quickly turned to admiration. The euro’s weaknesses were actually its great strength. Since no nation stood behind it, none would knock it down to get where it wanted to go. Just as the Europeans could never agree on sausages or military campaigns, they would never agree on the destruction of their money. If French wanted a weak euro to help enliven their economy, the Germans and the English would tell them to stop whining and show some backbone. If it were the English whose economy went soft and who wanted an easier money policy, likewise, the French would like nothing better than to deny it to them.


That is the charm of the Europeans; they detest each other mutually. The French would rather endure a depression themselves than spare the English one. And as for the Italians, the Irish, the Austrians…and all the other peoples at the periphery – well, they can just look out for themselves!


But rather than leave the European Central Bank weak and subservient, it actually makes it stronger and more independent. Its officials may have no more integrity than officials of the Federal Reserve. Their economic theories may be no better. But at least they are unresponsive. In central banking, the consequence of inertia and inactivity is almost always salutary.


While the Fed has cut rates…raised them…and then cut them again, the ECB has done nothing. And the euro has almost doubled from its low and now trades for $1.55.

Lex sent me an interesting book review at the Economist of A Demon of Our Own Design: Markets, Hedge Funds, and the Perils of Financial Innovation by Richard Bookstaber. The gist of Bookstaber’s thesis is that, complexity of financial products, interconnectedness, along with liquidity and the resulting use of leverage, is bad for the financial markets:

I think this is the coolest thing I’ve seen to hit the slow as morass world of education. Jonathan coined the phrase in response: “education arbitrage.” What a fantastic idea.

BOSTON (Reuters) – Private tutors are a luxury many American families cannot afford, costing anywhere between $25 to $100 an hour. But California mother Denise Robison found one online for $2.50 an hour — in India.

“It’s made the biggest difference. My daughter is literally at the top of every single one of her classes and she has never done that before,” said Robison, a single mother from Modesto.

Her 13-year-old daughter, Taylor, is one of 1,100 Americans enrolled in Bangalore-based TutorVista, which launched U.S. services last November with a staff of 150 “e-tutors” mostly in India with a fee of $100 a month for unlimited hours.

Taylor took two-hour sessions each day for five days a week in math and English — a cost that tallies to $2.50 an hour, a fraction of the $40 an hour charged by U.S.-based online tutors such as market leader Tutor.com that draw on North American teachers, or the usual $100 an hour for face-to-face sessions.

“I like to tell people I did private tutoring every day for the cost of a fast-food meal or a Starbucks’ coffee,” Robison said. “We did our own form of summer school all summer.”

Jonathan and Lex said it better than I can:

Jonathan: Agreed. The real story is that it potentially undercuts the entire
govt-schools system. If you have kids going from failure to excellent
performance based on a couple of hours’ tutoring per day, how much better
would they perform if they spent four or six hours every day with their
online tutors and blew off their schools entirely? That’s what parents will
be thinking. The teachers’ unions are going to try to make this kind of
tutoring illegal or so larded up with mandated bulls*** that it won’t be
effective. I don’t think the unions can succeed, however.

Those bast***s in the real, existing, Brezhnevite system we have here are going to EAT DEATH at long last.

This is the beginning of the market wedge that will split the whole rotten system apart.

I hope that’s the reception TutorVista continues to get as it catches. Check out their website here. Outsourcing hits education, disintermediation with a vengence…

Hedge fund blowups fascinate me. You may have heard about the latest: Amaranth Advisors and Brian Hunter. It’s the biggest blowup since Long Term Capital Management in 1998. The markets barely blinked this time. The difference is that LTCM traded in bonds, and with bonds, banks give you much greater leverage – ie they lend you more money on margin. LTCM had 5 billion in equity, borrowed up to $125 billion, and leveraged up via derivatives to $1.25 trillion. LTCM borrowed about 20x-25x their equity. Hunter borrowed about 5x his equity. Assuming Amaranth let him run 1/3 of their portfolio, or $3 billion, Hunter borrowed about $12 billion off that $3 billion equity, for a combined $15 billion bet. With 5x leverage, a 20% decline wipes you out. Leverage kills if you get it wrong.