I finally saw Mel Gibson’s We Were Soldiers (2002). My sister got me the DVD, and I watched it on the laptop. Small screen indeed. I thought it was a solid effort. Gibson is a competent but not brilliant film-maker, who knows his limits and operates within them. He reminds me of something George Thorogood (I think) once said — I only know three chords, but I know ’em cold. Gibson, similarly, knows how to do war and violence and mourning and survivor?s guilt, stoicism and family life all in a very plain and unironic style. Gibson also uses stock characters — the tough commander with a heart of gold, the hard-ass top sergeant, the handsome and idealistic officer doomed to die, etc. This all works decently well in Gibson’s hands, though it is a set of artistic blunt instruments he is wielding. Gibson tells a linear story — a war is underway, troops assemble, a leader (Lt. Col. Hal Moore, played by Gibson) appears, Moore trains them, he leads them into battle, many die, there is mourning over the dead. The parallel plot about the wives at home receiving death notices allows a counterpoint to the din of gunfire, explosions and screaming, wounded men. Moore’s wife is played in a convincing and dignified way by Madeleine Stowe. She is a good actress, with striking looks, who seems to have spent almost her entire career being squandered in sub-par movies. A third somewhat muted parallel plot has unidentified men in Saigon trying to figure out how to “sell” the story of what is happening back home. This allows the suffering and courageous soldiers to be contrasted with a cynical leadership which cares nothing for their lives and which has, in effect, betrayed them before it even committed them to battle. This seems true to historical fact, alas. It is also a theme which has deep roots in American war cinema, including the similar scenes in Pork Chop Hill (discussed here). Some scenes shown from the point of view of the NVA commander and his men are done well, and the NVA soldiers are depicted without rancor or ideology.

The battle scenes are graphic in the contemporary post-Private Ryan style. However, it seemed to me that both the Air Cav troopers and the NVA regulars all fought too bunched up. There were repeated charges, by both sides, with men standing only a few feet away from each other, against an opponent with automatic weapons. That struck me as wrong. This led to a video-game-like destruction of many NVA troops by the Americans. I suspect they did not die quite so easy. Also, an American counter-attack at the end led to a very “Hollywood” moment which did not strike me as plausible. But, I haven’t read here).

The fact that the critics hated this movie on ideological grounds was strong and accurate reassurance that I would like it. One film reviewer I read (can’t find a link; it was a long time ago) went on about how it was mawkish, corny and unbelievable to see Lt. Col. Moore, saying prayers with his children at bedtime. Since I and millions of other parents do the exact same thing, this scene in the movie struck me as perfectly normal. Apparently this particular film reviewer has never met anyone in person who prays with his children. A classic contrast between red state and blue state America right there.

All in all, We Were Soldiers is a good movie. Better than The Patriot, not as good as Braveheart. Worth seeing. Three stars.

(This is the second part of an email exchange referred to in this post.)

I picked up a book as a gift for a friend, Robert Kaplan’s An Empire Wilderness: Travels Into America’s Future

. Kaplan’s travel books are all worth reading. They are really strategic analyses of the parts of the world he visits admixed with his first-rate “muddy boots,” on-the-scene observations. If you don’t know his stuff I strongly, strongly recommend it.

I opened it at random and found this:

Throughout my travels [in the USA], I did not find much sympathy for blacks who require special help. Affirmative action evidently runs counter to the American notion that the scramble for wealth, jobs and positions be unaffected by the government. Of course, for so long blacks were denied such equality that affirmative action is simply an imperfect way of redressing grievances and fostering social stability by quickening their entry into the middle class. Though government may not be able to alter vast social and economic forces such as the disintegration of inner cities, that does not mean that it cannot soften such painful blows. Throughout history, social stability has been achieved by pacing out change so that it is never too burdensome and therefore destabilizing. Affirmative action fits well within this historical tradition of easing the burden of change — the death of inner cities and the creation of a sizable black middle class. But it has to be applied extremely judiciously, or it may split society rather than unify it.

[Lex] again. That is close to my view. I would phrase it differently, but Kaplan is close.

I take an even longer view. The integration of the blacks who migrated from the deep south in the 1940s and 1950s, due to the introduction of mechanical cotton picking equipment as well as in response to demand for low-skilled workers and greater freedom in the North, is just one of the more recent episodes of a landless, illiterate peasantry being driven from the country-side by dire need or perceived opportunity and into the Big City.

This process is one of the great, ongoing dynamic processes in world history. It goes back to Mesopotamia, and was hugely important in Hellenistic and Roman times. (Read Rodney Stark’s excellent chapter on Antioch

in his (superb) book The Rise of Christianity

.) Talk to a sociologist and he will say, “of course urbanization is modernization.” Historians are usually too microscopically focused to discuss this, with certain honorable exceptions like William H. McNeill. Talk to any normal person, and they are at best dimly aware of this universal phenomenon.

It happened in 17th and 18th century England. For decades you could not go out at night in London without armed guards. Samuel Pepys’ diary and Boswell’s depiction of Johnson’s London are 100 years apart, but the basic (violent, dirty, dangerous) texture of life is very similar, though it was somewhat better by Johnson’s time. London was transformed not by secular city planning, or democracy, but by a popular religious revival, specifically Methodism. This religious revival transformed the anarchic London of Hogarth’s “Gin Lane” into the safe and orderly city it became under Victoria’s reign and was until within living memory. (See Jenny Uglow’s book Hogarth: A Life and a World

Similarly, the Irish in New York in the 1840s and ’50s were a violent, gang-ridden, drunken underclass, with vast majorities of children born out of wedlock and frequently abandoned. The grandchildren of these dead-enders became the familiar stodgy, tough, pious Irish Catholics we think of here in America, due to a religious revival led by such men as Dagger John Hughes.

This process took about three generations in New York and Boston and other locales for the Irish. To inculcate middle-class values and conduct into the rural poor and to acclimatize them to urban life, rules and expectations seems to take about that long once you get serious about it. It was faster in Chicago, where there were more economic opportunities.

Similar processes of internal immigration, urbanization are occurring now in South America and Africa, including a revival of popular religious enthusiasm. Lagos and Sao Paolo are the London and New York of the next century. Or so we hope. See Philip Jenkins on the religious dimension of this:

The fact is that America has long been and remains the emigration destination for the world because the opportunities are here to be grasped. The problem with most poor and backward communities in America is that they have failed to develop the skills and habits to grasp those opportunities. Clarence Page had an article in the Tribune (August 13, 2003) on this very topic. Black children of middle-class families did less well in school than white children despite similar income levels. The parents and the kids had still not mastered certain practices and attitudes which are necessary to be academically competitive. Page, to his credit, is willing to face this squarely. Blaming Whitey for something like that is simply not plausible to any rational observer.

Liberals call this view of things “blaming the victim.” I call it “facing reality.”

The rural-born black American and his children and grandchildren have had a hard time. That is a fact. But that community has actually had a relatively easy time compared to similar peasant migrations, due to the (comparatively) free, orderly, prosperous and receptive conditions prevailing in urban America. It takes nothing away from their suffering to be aware of this. And it is foolhardy not to be aware of the larger picture both geographically and historically, to learn from hard-won lessons in other places and times. Americans are too parochial. Our country does not exist in a galaxy of its own, nor is today all that different from yesterday in many important ways. We are unique in some ways, but only in some. Common patterns which take on a local or contemporary coloring are still common patterns — and hence suggestive if not dispositive of possible solutions or at least (being a conservative I do not think the world is composed of “problems” with “solutions”), possible ameliorative or mitigating measures.

The well-documented balkanizing and politically destabilizing effect of race-, class- or linguistically-based preferential policies world-wide is a topic for another time, if ever.

We Americans do ourselves a disservice if we think we can work miracles overnight. And by overnight I mean other than over the course of several generations. We have accomplished absolutely breathtaking things in the area of race relations in the last 50 years. This is an accomplishment we should be aware of and proud of. Looking at our situation with too narrow a focus leads to an unmerited sense of failure. It also feeds a neurotic and counterproductive sense of liberal guilt. And that in turn leads to ill-considered social policy.

I’m feeling kind of blogged out and decided to post something different. I’ve been going through a batch of family photos that no one has looked at in years. It’s like a time capsule. A few of the pictures may be of general interest. I really like the ones below. A relative of mine made them when President Nixon visited Jerusalem in 1974. 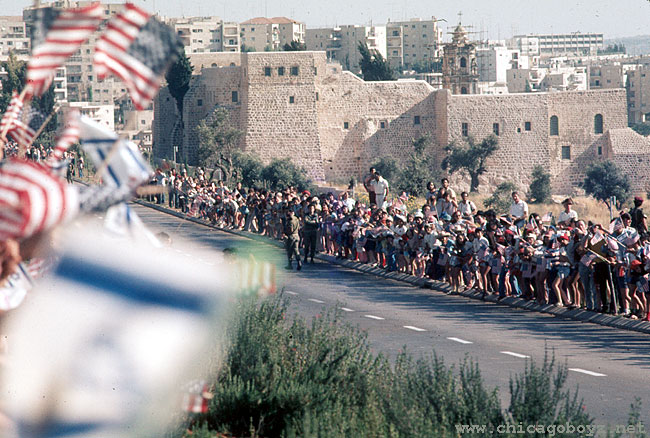 Parade route with Monastery of the Cross in background. 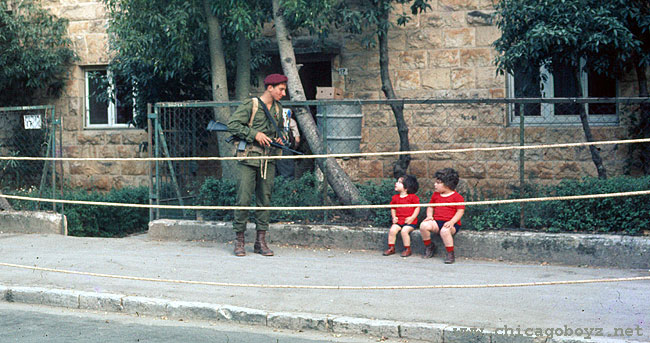 I don’t know where this was. It may have been across the street from the prime minister’s residence. 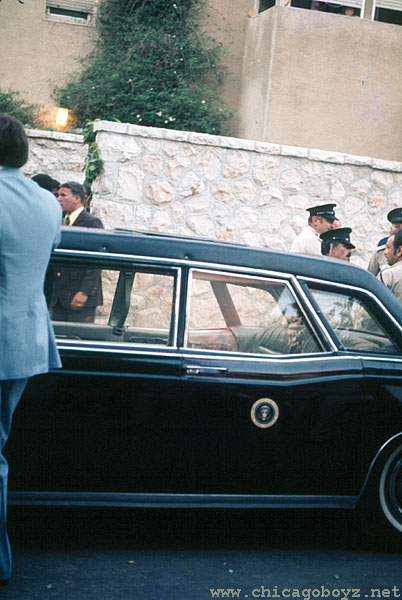 Outside the prime minister’s residence.