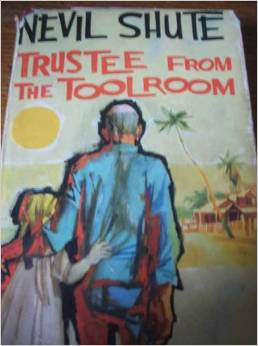 Trustee from the Toolroom

This novel tells of a lifetime adventure by a man whose life had avoided adventure thus far. Keith Stewart spent the Second World War working as a “fitter” or machinist in defense industry. There he met his wife Katie and they bought a home in West Ealing, a suburb of London where Shute the author once lived and which he uses often as a setting. After the War, they settled down and Keith eventually quit his job and began a career as a technical writer for a small magazine that catered to hobbyists who made miniature machinery, like small steam engines. The magazine was called “Miniature Mechanic” and developed a world wide circulation and many devoted fans of Keith’s writing.

Keith had come from an impoverished childhood in Scotland and had one sister named Jo. Jo had raised herself socially by marrying a Royal Navy officer who came from a noble family that was quite wealthy. They had a daughter, Janice, who, at the time of the novel is nine years old. Jo’s husband, John Dermott, has taken early retirement from the Navy and they want to emigrate to Canada. Post-war England is a dreary place, a theme in several of Shute’s novels. One problem of post-war England is that currency controls severely limit funds that may be taken out of the country even on holidays. As late as the 1960s, I remember friends of my in-laws who were dependent on their American friends for travel to the US. Jo and her husband, John, have decided to smuggle their assets out of the country to Canada by converting them to diamonds and secreting the diamonds in the keel of their small sailboat, which they will sail to Canada. Keith helps them, not knowing the purpose, by setting a jewel case into the keel for them. They tell him that this just contains a few of Jo’s jewels they want to take. While they are gone, a matter of six months or so, they will leave Janice with Keith and Katie who have no children of their own. They don’t like the fast life of John’s relatives even for six months and know that Keith and Katie will always be living in the same house and will provide a quiet place for their daughter until they can send for her.

They leave England a bit later than they had planned because they had to get Janice settled and they want to visit Tahiti on the way. Small boat sailing does not follow a great circle course like a ship and Shute knows about sailing from his own experience with his sailboat before the war. A course from the Panama Canal to Canada could very well include Hawaii on the way. The side trip to Tahiti should add a month or so but is well within the capability of a small sailboat. The problem with the late departure is that they have gotten into hurricane season in the southern hemisphere. They encounter a hurricane in the vicinity of the The Tuamotus archipelago a very large group of small islands and atolls east of Tahiti. The islands are low, just above sea level and were a terrible hazard before GPS made navigation more exact. The description of the hurricane and how they deal with it is quite good. I have sailed a small boat (38 feet) through a small hurricane off Mexico. The one they encounter is much larger and it forces them down onto the lee shore of one of the Tuamotus islands. As they realize their predicament, they reassure themselves that Keith will take care of their daughter but then they also realize that all her inheritance is in the sailboat with them.

Keith is notified of their loss by the solicitor who also learns that their assets have been sold. Keith discovers from him about the law banning asset emigration and has some serious thinking to do. He is the trustee and, once he gets more detail about the wreck, suspects that the keel and the diamonds are embedded in the reef that destroyed the sailboat. What can he do ? He has only a small salary and Katie has to work in a shop to support their frugal life. If the diamonds cannot be found and returned, Janice will have to go to the council school and get a job at age 15 like other girls in Keith’s circumstances. He discusses his situation with his publisher who offers a small advance on his salary, an inadequate proposal. He is unable to ask for help because the diamonds were smuggled out of the country and would be confiscated.

He calls on a man he knows through modeling who works for a freight airline. They offer Keith a free trip to Hawaii as an engineer “under instruction.” That will get him half way to his goal and he decides to try it. Once in Hawaii, he finds there are no commercial passages to Tahiti except airline travel which he could not afford. His only possibility is to sail with an illiterate fisherman who has sailed from Oregon in a boat he built himself. Against all the advice of the people he knows, he decides he must do this. What follows is a sailing adventure as the “pasty faced” man with no sailing experience and in the condition one would expect with a sedentary occupation, must learn to sail and navigate while concealing the true purpose of his quixotic quest for his sister’s resting place. From this point it becomes a sailing adventure and then there is more engineering as others come to his aid. It is a very satisfying novel and has been criticized because the characters are unrealistically good and help each other but I find it reassuring when I think I am getting too cynical.