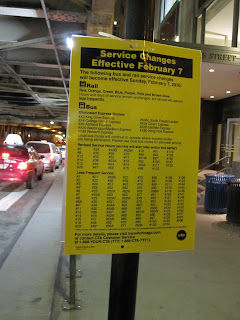 I knew it must be time for the annual “dance” regarding the Chicago Transit Authority budgets when I saw this sign up on a bus stop near the Merchandise Mart. The sign detailed the threatened cuts to bus routes if 1) the CTA doesn’t get more money 2) the unions don’t give back their recently negotiated pay raises.

This is no way to run a state. This article in the Chicago Tribune describes the annual ritual:

The CTA made an offer today that its labor unions could refuse, and they quickly did: Give back a 3.5 percent pay raise this year in return for reducing employee layoffs and major cuts in bus and rail service that are set to begin Feb. 7.

The standoff threatens to cost 1,067 union and 100 nonunion employees their jobs as the CTA whittles away at a $300 million budget deficit that is caused mainly by tax-revenue declines linked to the recession.

But the public stands to feel much of the pain in less than three weeks when there will be longer waits between buses on 119 routes, 41 bus routes will have shorter hours and nine express bus routes will be eliminated.

Note – the unions aren’t being asked for cuts – they are being asked to give up scheduled pay raises. But of course they are balking at this; after all, why concede anything, when the politicians back down every time and just issue debt or raise taxes to cover it anyways?

No one knows how this will end; in the past the state always stepped in to throw more money at it, or come up with some sort of accounting or borrowing gimmick as a temporary fix, but our financial situation is getting more and more dire by the day.

For a while I was thinking of setting up a site dedicated to Illinois’ fiscal woes, but someone beat me to it.

IllinoisIsBroke.com describes the state of our state, which is of course very bad. This site puts most of the blame on our broken and underfunded pension system, which is a prime culprit.

It will be interesting to see how the game of chicken plays out this year since our funding options are drying up; some day this game has to end with the draconian cuts being implemented to wake people up to the situation.