Our energy situation broadly cleaves into two main functions – natural gas, and electricity. Natural gas is used for industry, heating homes and powering stoves, and is taking a greater portion of the electrical generation load. Electricity also overlaps with gas when it comes to home heating and cooling, and is obviously a large component for industrial uses. However, the natural gas and electricity energy industries in the United States have moved in profoundly different directions over the last few decades. The purpose of this post is to describe where we are, as a country, with regards to natural gas. In short – we got it half right.

One critical difference between electricity and natural gas is that natural gas can be stored while electricity must be available at the specific time it is needed. Thus users and utilities can store natural gas and have it available for peak times, while the only way to meet peak load demand for electric utilities is to have units on line generating electricity during the hottest parts of the day or to “shed load” by pushing customers off-line to reduce demand.

Both electricity and natural gas are mostly consumed using North American (including Canadian) resources. While OPEC maintains an oil cartel, the fuel used to generate electricity (coal, nuclear fuel, gas) mostly comes from North America. While these resources can be transported across the ocean (for instance Japan imports virtually all of what it needs to fuel electricity) in the USA (and Canada) we have most of what we need for these industries. Until recently there wasn’t a practical way to bring in natural gas from regions that weren’t connected by pipeline, so we were bound to use North American resources.

The exploration and extraction of natural gas is a mostly unregulated industry (compared to electrical utilities, at least). The biggest constraint was that vast swathes of the US were placed off-limits for natural gas drilling due to environmental concerns. In the 1970’s, a moratorium was placed on new natural gas connections because it appeared that the US would run out of natural gas. However, improvements in extraction capabilities resolved that situation and wildcatters responded to higher prices by finding additional supplies.

Recently it looked as if we were going to run out of natural gas again. Futures prices on natural gas, which were around $2 / unit in the 1990’s, spiked to as high as $14 / unit in the winters of 2006-8 (prices are seasonal and typically move with the weather) but now are below $4 / unit due to the fact that massive supplies of natural gas have been located in shale formations as drillers redoubled their efforts in light of these high prices. 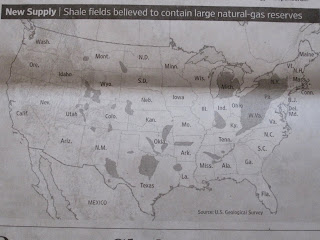 The natural gas industry, as we can see above, is able to use market forces to respond to price signals. Drillers used innovation and new technology to find new supplies which in turn brought down the high prices. If the extraction / exploration industries were heavily regulated and monopolized (like power generation), it is likely that they would just have utilized the high prices as an opportunity to reap large profits rather than to expand supply.

Regulation of natural gas was profoundly impacted by FERC order 636 in 1992. At that point, the pipelines were forced to open their capacity to multiple bidders, including “end use customers” who were able to buy gas directly (through brokers) and have it transported to them directly. This order is generally credited with de-regulating the pipeline industry, once their “stranded costs” were recovered.

While there are many difficulties in building new pipelines from an environmental and cost perspective, generally the United States natural gas industry has been able to bring new pipeline capacity on line. This is different than the electricity transmission industry, where new capacity additions have been relatively minuscule. One big reason is financing – the pipeline companies can get end users to “subscribe” to pipeline capacity to fund development while there aren’t effective ways to “monetize” demand for transmission capacity in the still heavily regulated electricity sector. In short, a new electrical transmission line benefits everyone in terms of access to lower prices and improves reliability (because the grid is interconnected and load needs to be spread) but there isn’t an easy way to pay for these benefits.

Another improvement in transport is Liquified Natural Gas, or LNG. Cooling and compressing natural gas allows it to be transported on special tankers which can carry it across the ocean and into new markets. Many nations (such as oil producing nations) are awash in natural gas (sometimes they just burn it off as they extract oil) but they don’t have a way to get it to countries that can utilize it (such as the United States). LNG offers a way to do this, assuming you have a pipeline leading to the port and the LNG facility is built (they cost billions to build) and also that the LNG facility at the end country is interconnected with a pipeline that has available capacity. Here is a link to the physical location and capacity for the nine LNG terminals in North America. As you can see, they are concentrated on the gulf coast of the United States. The US has added LNG capacity, which is great because it allows for price competition from overseas producers and also (theoretically) allows US producers to ship their gas overseas, as well.

Alaska has huge amounts of natural gas. For years they have been considering how to get that gas to the “lower 48” where there is high demand. This article from the WSJ titled “Latest Risk to Alaska Gas Pipeline: More Gas” (which is where the shale graphic above also came from) describes the effort to build and finance the pipeline. The two options are 1) build a pipeline to the coast and an LNG terminal which they could be exported, costing $26B 2) build a pipeline through Canada all the way to the lower 48 at a cost of $41B. The pipeline would take a decade to build – meaning that they would need a forecast of natural gas prices in the lower 48 in 2020 to finance this effort. 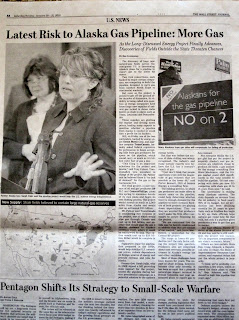 However, the shale gas boom has blown a huge hole in the economics of this pipeline. It is much harder to justify this giant investment at $4 / unit gas than at $14 / unit gas. Per the article:

“I think we’ve probably cost ourselves a few years, which allowed the shale plays to come in… we should have build this pipeline four years ago”

This is from the perspective of the State of Alaska – because once the pipeline is built the cost of extraction is low and the Alaskan natural gas would sell at the market price in the lower 48 (whatever that turned out to be) – but with the lower prices, you can’t finance this new pipeline at all.

Distribution is the least important element of the natural gas industry. This function is your local pipeline company, that has a monopoly on pipes because it doesn’t make sense to have 2 companies digging up streets and having parallel infrastructures (like it does for telecom). The local company pays for gas and passes it on to end customers, and pays the transportation costs (negotiated per FERC rules on open access) as well. They also finance the local pipeline distribution infrastructure. While you may pay a large natural gas bill – take a look at it – only the portion for local distribution and customer service actually goes to the local distribution company; the rest pays other elements of the supply chain (extraction and transportation).

Innovation has been pretty low in this sector of the industry, but really there isn’t a lot to do. When natural gas was at $14 / unit these utilities were feeling the brunt of customer anger, but now their situation is much more low-key. At $14 / unit there was a lot of interest in conservation and perhaps fuel-switching or use of other technologies (i.e. solar to heat water instead of natural gas) but this interest has waned lately at $4 / unit. Electrical utilities are spending billions on time-of-use meters but natural gas doesn’t have quite the same time-of-use issue because they can store capacities locally and inject them into the system at peak times (up to system capacities). Since the natural gas infrastructure is largely underground it is less subject to storm damage and other sources of outage when compared to the electrical industry, which suffers mightily from these sorts of outages.

The falling prices of natural gas are having a profound impact on the electrical generation industry. At $4 / unit, natural gas is competitive with less efficient coal units and blows the renewables out of the water (except for hydro, of course, but you can’t build any more hydro in the USA due to environmental concerns). Natural gas is cleaner than coal and easy to construct and site, so it becomes the de-facto solution to our looming energy generation capacity crunch, as well. In other blog posts I predicted that new coal and nuclear plants were a figment of the media’s imagination for a variety of reasons, but the plentiful supply and low price of natural gas (due to these shale fields) is another stake in the heart (if one was needed) to any designs on new coal or nuclear plants.

The reaction of our non-regulated natural gas industry (exploration) to high prices and how they basically “solved” our energy problems (and will solve our electricity issues, per above) should be a text book example studied in all schools. This is what happens when markets are allowed to work as they should, and innovation responds to high prices as a market opportunity, in turn reducing prices down towards their historical norms. It didn’t come through MORE regulation, or jaw-boning rich capitalists, or NY Times op-ed pieces – it came through free markets and the belief in human innovation.

We got it half right, at least. For more info if you are interested go to this site, naturalgas.org, which seemed to have reliable information and links to other useful information.

7 thoughts on “Natural Gas – We Got it Half Right”