Muse is a British band that is huge overseas but starting to get more of a following in the states. I recently saw them at the United Center (I saw them at Lollapalooza in the rain two years ago, a great show) and it was a very entertaining concert. Their set list from the show is here with links to the songs; someone updated this set list minutes after the show had ended. 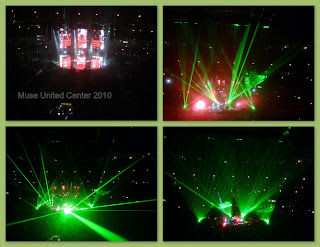 I have seen a lot of concerts and the effects on the Muse show were top-rate. I have seen the band Tool which uses intense visuals & who put a lot of effort into their show and I did not see U2 but their last tour obviously looked state-of-the-art, as well.

Recently I saw a comedy special by Nick Swardson, who played “Terry” the roller-skating gay prostitute on the sadly canceled Reno 911! show. In this unlikeliest of places I heard something that made me think… the comedian was talking about how blase we are today, about the special effects for a movie like “Transformers”. He said that if people from the 1950’s saw that movie their heads would explode while today in the 21st century we just take it for granted.

As I watched the effects and sound on the Muse show I thought about how much the sound quality, visual effects and stage quality (the stage components rose and fell independently in synch with all the laser and light effects) and how they would just blow away anything from the 60’s – 80’s. If you brought in the top shows from those years the artists and fans would just stand there, mouth agape as they watched something like Muse, with their integrated lights / effects / and sounds.

As some people (generally baby boomers) talk about how rock music was better in different eras they obviously aren’t considering how much vastly improved the concert experience has been made by modern technology, when properly done. Not only are the visual effects better, but the performers have better microphones and monitors and supporting technicians on hand. The effects in those eras probably only were effective if you provided your own chemicals in the brain as enhancements.

10 thoughts on “Muse and the Concert Experience”