When Dan and I were first invited to join Chicago Boyz Jonathan mentioned my high quality posts on energy and taxation.  Recently I have not been writing too often about taxation because the news from the US perspective has been almost universally negative.

Two core principles of taxation are:
1) the tax should be effective, meaning that if it intends to raise a certain amount of revenue that it should be designed to achieve that end
2) the tax should minimize negative impacts on overall economic behavior 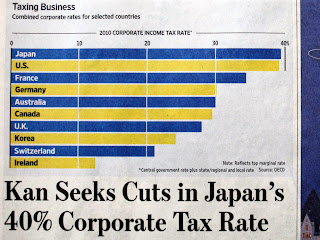 There was an old joke that Arkansas’ motto was “thank god for Mississippi” because else Arkansas would have been #50 in the rankings by state on various metrics.  In that same vein, when ever I talk corporate taxes and about how the United States is the least competitive corporate tax environment in the world, they would say that in fact, Japan was worse.

Now even Japan has woken up to the fact that high corporate tax rates push investment overseas (since companies can choose where to invest in new plants, subsidiaries and businesses) and are a relatively poor way to raise incremental tax revenues.  According to this Wall Street Journal article titled “Kan Seeks Cuts in Japan’s 40% Corporate Tax Rate” the newly installed Japanese government is considering reducing this punitive rate, which would take away our “Mississippi” per the analogy above.

As you can see from the simple chart, the US is punishing companies that choose to invest in the US with a high corporate tax rate.  Many other countries are using their lower tax rates as a lure; Ireland is famous with its compelling 15% tax rate, which it uses as a major selling point.

I realize that there are ways to minimize these taxes, but these actions distort economic activity and are a time consuming distraction for major corporations.  Better yet just to make incremental investments elsewhere rather than deal with a burdensome corporate tax environment, if two possible alternative locations are relatively consistent in terms of benefits, otherwise.  It isn’t just a co-incidence that US job growth has been lagging in the latest “recovery”; corporate tax rates are definitely a factor on the incremental investments that could drive significant job growth in the country.

One of the most distorting elements of tax policy is the estate tax.  Over the years countless articles have been written and billions of dollars in legal and tax advice have been spent on how to avoid the estate tax in the United States, spawning countless trusts and other legal vehicles.  Certainly anyone with an estate worth more than a couple of million dollars has spent at least some time on the topic, and it is an obsessive topic for those with large estates.

And in an incredible bit of irony, due to the way the estate law was written by the previous administration, the tax on estates in 2010 is ZERO.  A wealthy Houston man named Dan Duncan was the first billionaire to die in 2010 and have no estate tax.  It is safe to say that tax experts expected some sort of “fix” for this gap in the estate tax but since it is now June of 2010 and this individual has died and his billions of dollars are in the process of being distributed it is hard to imagine that they will retroactively implement an estate tax for this year because it would certainly be challenged, on very legitimate grounds.  To put this in perspective, the estate tax will revive in 2011 at a rate of 50% for estates over $1M.

If you would have polled 1,000 lawyers and tax experts 20, 10, 5 or 2 years ago and asked them the odds that a billionaire would die in 2010 and pay ZERO estate taxes they would have likely put the odds of this happening at near zero, as well.  For after all their web of legal entities, trusts, and plans for distributions would all be for naught if the government did not tax estates upon death.  Thus the vast effort likely put into estate planning for Dan Duncan (I have no information on what was done, but given that he was a billionaire it is reasonable to expect that it had been a frequent topic of analysis) was not only useless, it was counter-productive.

It is hard for even the most adamant defender of the US tax code (if such a person exists) to explain how a whip-saw policy like this on the estate tax is remotely in the interests of the United States.  While we employ vast reams of otherwise non-value adding tax lawyers, bankers and accountants on estate planning, they don’t even know the barest rudiments of the future that they are planning FOR, as this incident well illuminates.  If people knew that there wasn’t going to be an estate tax, they wouldn’t waste time planning for it, and they wouldn’t engage in economically distorting activities in order to minimize it.

While moving to a “zero” estate tax policy would be good from many angles we are likely in the “worst of all worlds” in that we will retain an estate tax and re-implement it in the near future and still, because of our thicket of lawyers and accountants and distorting economic activity, it won’t make much money.  Thus it will fail on #1 and #2 of the rules above, assuming of course that we don’t recognize that the estate tax is a bad idea and just consign it to the dustbin of history.

For the most technical people following this discussion it is true that many states did not discontinue their tax policy on estates, so individuals do face state estate taxes upon death, but Texas does not impose an estate tax, so in this example there was no impact.

Cross posted at LITGM and Trust Funds for Kids