Pitchfork is an annual music festival based in Chicago, which is presented by the Pitchfork music web site. I went to see the band LCD Soundsystem at the show at Union Park last Saturday night. 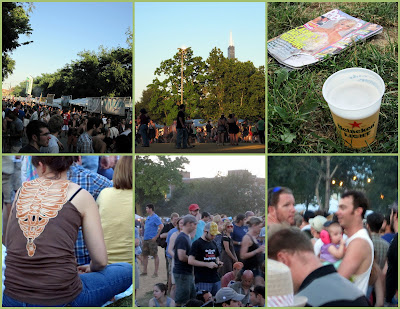 Upper left – one thing for sure is that any festival will have long beer lines, especially in the hot sun. People were generally not too unruly and they deserve kudos for dropping the price of water to $1, and $5 for a Heineken wasn’t too bad. Upper middle – Union Park is on the near West Side, a place that you couldn’t run out of fast enough even 10 years ago. To have a big show there is an amazing turn about for the city, the vibe seemed to be like Wicker Park had about 10 or so years ago. You can see the top of the Sears Tower looking east towards the lake. Upper right – for some unknown reason someone brought a People magazine to the hipster show and it was on the ground while I sat down and had a beer in a bit of shade. At least they were smart enough to take their name off the mailing label. Lower left – that woman was wearing the hideous “visible backbone” shirt along with designer jeans that I was informed cost > $300 / pair. My inside joke to Dan is that she probably is from Baltimore and this is hiding her skull tattoos. Lower middle – if you look at the guy’s shirt in the middle of the photo it says “Do I look like a F*cking People Person?”. Nice. Lower right – I guess if you bring a baby to the show at least bring ear protection, but it seems kind of nuts to do that in the first place. 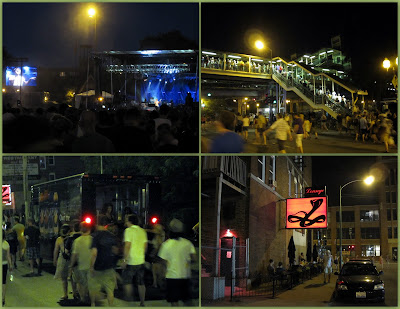 Upper left – LCD Soundsystem put on a great show. This photo came out clear and you can see the front man Murphy on the close up screen to the left of the stage. LCD is one of the most important electronic bands and Dan would like Murphy because he practices martial arts and is a damn smart guy. Their song “All My Friends” was #2 on the Pitchfork list of best songs of the 2000’s and “Losing My Edge”, the story of an aging hipster no longer the coolest, was #13. Upper right – the Green Line was totally packed after the show lots of people tried to take public transportation and it was a beautiful evening. Lower left – marketing girls were handing out some awful energy drink in front of the Cobra Lounge… just what you need after midnight, I guess. Lower right – Cobra Lounge is supposed to be a rocker bar but I saw a bunch of guys texting on their iphones in tables outside that wasn’t too metal. I liked the cowboy dude, though. He apologized for “blocking my picture” and I said, “You ARE the picture”. Check out their reviews on Yelp I got a laugh. I like this one:

If you want to get drunk and start a fight or screw someone in the bathroom – this is the spot for you. I’ve been here a handful of times, and every time I’m there, something insane happens. Someone picks a fight with a UFC/MMA wannabe dude (or his girlfriend), someone gets wasted and ends up in Greektown with no wallet/no phone/no idea where they are, or someone (ahem) gets roofied and shows everyone in the bar their t and a. Literally, every evening here starts out cool enough…there’s a diverse crowd despite the look of the place, the bartenders are nice enough and the drinks are strong, the music selection is awesome….and yet somewhere around the 2 hour mark, sh*t pops off. It’s a phenomenon I can’t yet explain, but you can bet my (sweet and likely visible) ass I’ll keep going there until I figure it out. Annnnnd probably after. What can I say? I love trouble.

Walking home maybe I was pushing my luck because a CTA bus rolled to a stop and offered me a ride, figuring maybe I shouldn’t be out walking in that ‘hood that late (note – that generally doesn’t happen). But I didn’t have my CTA card with me and later got in a cab because it was hot out and I was sick of walking.