Lollapalooza 2010 is being held in Grant Park in Chicago. The music festival goes for three days on a Friday – Sunday and I bought a 3 day wrist band which lets me come and go during the weekend. 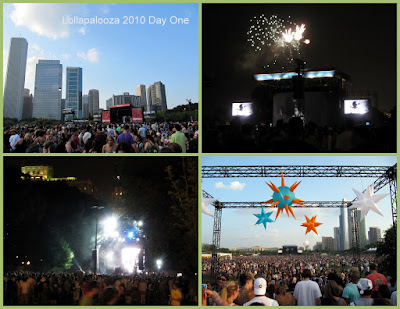 On the first day the crowd seemed large, as you can see in these photos. The upper left is the mid-day crowd on Friday watching the Black Keys, on the north end. The lower right shows the crowd facing south just past Buckingham Fountain, which is the center. Lady Gaga played a strange show, dropping more f-bombs than Snoop did last year, but she was certainly trying hard and wearing virtually nothing for half the show and brought fireworks for the finale. On the lower right is Perry’s, where the crowd dances into the night. 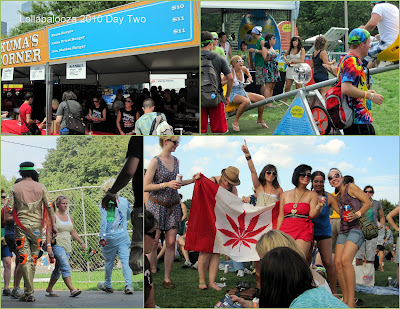 There weren’t a lot of bands that I was into the second day. I wasn’t going to attend at all but the weather was nice so I decided to go over and watch the crowd and have a few beers. In the upper right you can see Kuma’s Corner, where they had HUGE hamburgers that you have to see to believe. If you go to the restaurant in Chicago you have to stand in line for hours to get them – it is a heavy metal shop as you can see they have the Iron Maiden and Judas Priest burgers. On the upper right there was a see-saw that generated enough power to make sno-cones. On the lower left you can see some of the very strangely dressed people as they went to Lolla to make a statement. And on the lower right some very pro-dope fans from Canada during Metric.