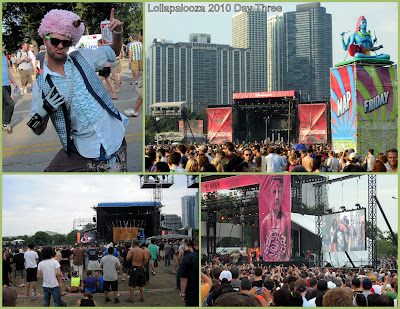 Lollapalooza day three was HOT. In Chicago it doesn’t get hot like Florida but with humidity and direct sunlight it was enough to wipe out most of the crowd. The guy in the upper left had a lot of gas left in his tank, though. On the upper right, a view looking north with the Lolla icon. Lower left, a view of Wolfmother, which played to an emptied-out south half, and Cypress Hill, who had the whole crowd engulfed in a cloud of smoke of the non-traditional variety. 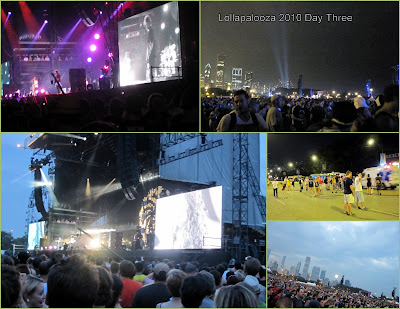 But for me the whole show was about SOUNDGARDEN. I never saw them while they were in their prime during the grunge days but they re-united for Lollapalooza and frankly the pre-concert vibes from critics weren’t that great. But Soundgarden silenced the critics – Chris Cornell’s voice was absolutely awesome – and they bludgeoned the crowd with a hammering set of their classics.

Upper left – I got up front and to the right of the stage (conveniently near liquor, to boot) and this is from later in the night before it got pitch black. Upper right – the view looking north with spotlights in the background. Lower left – a view of the show early on. Middle right – as the night ended, the inevitable ambulance rides off. Lower right – the crowd cheering early on for Soundgarden.