Today, September 20, Catholics would be celebrating the feast of St Eustace according to the liturgical calendar had the legend of his conversion not been found “completely fabulous” by the Church – and fabulous indeed it is. As the Golden Legend of Jacobus de Voragine recounts the story of the Emperor Trajan’s general Placidus, known after his conversion as Eustachius / Eustace:

on a day, as he was on hunting, he found an herd of harts, among whom he saw one more fair and greater than the other, which departed from the company and sprang into the thickest of the forest. And the other knights ran after the other harts, but Placidus siewed him with all his might, and enforced to take him. And when the hart saw that he followed with all his power, at the last he went up on a high rock, and Placidus approaching nigh, thought in his mind how he might take him. And as he beheld and considered the hart diligently, he saw between his horns the form of the holy cross shining more clear than the sun, and the image of Christ, which by the mouth of the hart … spake to him, saying: Placidus, wherefore followest me hither? I am appeared to thee in this beast for the grace of thee. I am Jesu Christ … I come hither so that by this hart that thou huntest I may hunt thee. And some other say that this image of Jesu Christ which appeared between the horns of the hart said these words. And when Placidus heard that, he had great dread, and descended from his horse to the ground.

Pisanello’s “The Vision of Saint Eustace” in the National Gallery in London captures the fabled scene wonderfully: 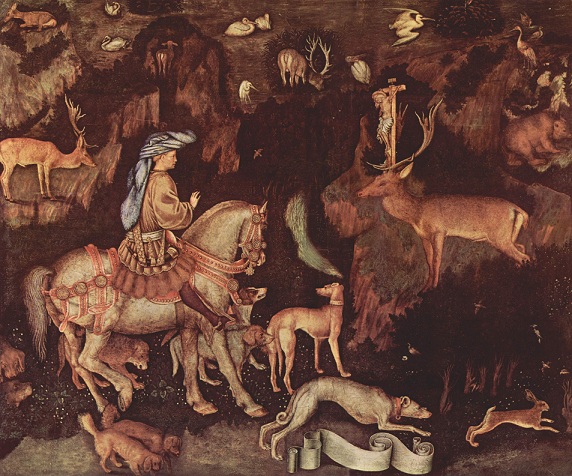 There is also a Durer engraving of the scene.

Catholic doctrine requires that the commemorations of saints should remain faithful to historical fact and not legend, and accordingly the commemoration of St. Eustace passes into the hands of those for whom dreams can carry as rich a freight of meaning as waking life.

John Fowles, in his journal for 1 August 1963, writes of Pisanello:

Over all his paintings hangs ‘the strangest poetry of situation’… I see in his paintings all I have tried so many years to do in certain poems – that is, to rise above the mere gimmickry of ambiguity of metaphor and image and to achieve a kind of meta-allegorical, the strange moment caught, as he perfectly catches the haunting and multiple mystery of the man riding through the magical forest and coming on the stag with the crucifix.

His painterly alter-ego, Breasley, in Fowles’ magnificent novella The Ebony Tower, speaks of Pisanello as his “central source”:

Breasley himself had partly confirmed this, when someone had had the successful temerity to ask him for a central source and for once received a partly honest answer: Pisanello and Diaz de la Pefla. The reference to Diaz and the Barbizon School was a self-sarcasm, needless to say. But pressed on Pisanello, Breasley had cited a painting in the National Gallery in London, The Vision of St Eustace; and confessed it had haunted him all his life.

The St Eustace turns up again in Fowles’ novel The French Lieutenant’s Woman and in his essay The Tree — where he admits that Breasley’s “central source” is among his own:

We all have our favourite pictures, or ikons, and one of mine has long been a painting by Pisanello in the National Gallery in London, The Vision of St. Eustace: the saint-to-be sits on his horse in a forested wilderness – he is out hunting – arrested before his vision of a stag bearing Christ crucified between its antlers. Other animals, birds and flowers crowd the background of the small picture… What is truly being hounded, harried and crucified in this ambiguous little masterpiece is not Christ, but nature itself.

Fowles is not alone in his appreciation for the legend: another of the greatest writers of the recently-ended century also found inspiration in St. Eustace.

Russell Hoban’s masterwork Riddley Walker carries us into a post-apocalyptic world with its own transfigured English language. Hoban wrote his novel under the inspiration of a mural he saw in Canterbury Cathedral, here described by Charles Eveleigh Woodruff in his 1912 Memorials of the Cathedral & Priory of Christ in Canterbury.

In the recess of the blocked window nearest to the transept in the same aisle a faded representation of the legend of St Eustace may still be traced. … That this picture is meant to illustrate the life and martyrdom of St Eustace is clear from the crucifix between the antlers of a large white stag, which is in accordance with the legend of his conversion; and the brazen bull, with a fire burning beneath, into which an executioner is forcing the martyr.

In Hoban’s telling, St Eustace becomes Eusa, and his legend as depicted in that mural at Canterbury Cathedral the center of what memory survives the holocaust. Here is the Cathedral as Hoban’s post-apocalyptic narrator finds it:

In Hoban’s own Glossary on p. 235 of Riddley Walker: Expanded Edition, the entry for “wud” reads:

The church of the arts does not fail to commemorate and celebrate the sanctities of the imagination.

15 thoughts on “Remembering a Roman soldier who went hunting…”