On my Direct TV there is a channel called “Palladium” which has music videos and concerts in high-definition and from time to time I’ll pass through and see something that catches my eye. They had a concert from the band “Buckcherry” that I recorded and watched because “Lit Up” is one of the best party songs ever recorded and they had some other good ones including “Crazy Bitch” which brought the band back to life (they were on hiatus without much of a future but that song immediately catapulted them back into the spotlight).

As for their front man, Josh Todd, when I see him it reminds me of philosophical discussions usually at late night bars of why people, generally girls, are making terrible choices or acting in a reckless manner. My answer usually is that “Plan B for them wasn’t to become a rocket scientist”, basically saying that they are reaching for the stars in their own manner. 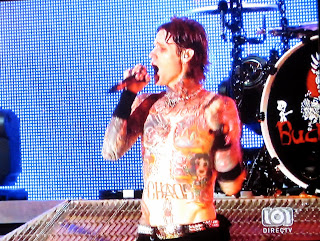 As for this guy, is there ANY other higher purpose for him except to be a rock and roll singer? He is skinny, an ex-addict, and covered from head to toe with tattoos. He LIVES the rock and roll lifestyle, at least from the perspective of someone that just sees him up on stage.

The problem is that there are about 5 or so spots that can support a decent lifestyle and about 1 million people trying to attain one of those spots. I need to quote from my favorite source for actually-pretty-true-news, The Onion:

You can’t really top that. According to Taleb (in a book review I need to write up someday) probably no one has gotten luckier than Hetfield; in a million other universes he ends up (at best) as employee of the month at Taco Bell; remember that this guy was an insane alcoholic for decades and only in the Rock and Roll business is that tolerated for so long.

4 thoughts on “Best and Highest Purpose”