Anyone recognize this guy?

That is Thor, comic character from Marvel Comics. Based, of course, on the deity worshiped by the Norse.

What can this object of ancient reverence do to warrant such regard? Like most thunder gods, he can hurl thunderbolts that destroy his enemies as long as he wields a mystical hammer called Mjolnir.

That is the main thing thunder gods do, after all, and it seemed to be something that would be extremely impressive to the Vikings. 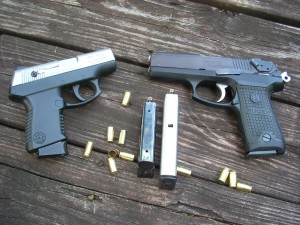 My favorite carry guns. They are smaller and lighter than that hammer thing, and yet I can still create thunder by no more effort than making a fist.

Sure, it isn’t exactly the same thing. I can’t call the storm like Thor supposedly could, for example. But it still is a perfectly common, well known, mature technology that expands my abilities to something that is impossible for an unaided human being to duplicate.

I’m bringing up the fantastically obvious due to this online article. (Hat tip to Glenn.) Some really strange young woman has a hobby where she cuts herself open in order to shove magnets down amongst nerve clusters. Says she can feel magnetic fields that way.

Well, whatever. Back in high school I knew a girl who would do stuff like that if she was off her medication for awhile. She was really odd, as you might imagine, but at least she never claimed that she was slicing away in order to become a small “g” god.

“For decades, transhumanists have argued that science and technology are approaching (or have approached) the point at which humans can take evolution into their own hands. They can transcend limitations of sensation or movement or even lifespan that are purely the accident of evolution. Some thinkers focus strictly on the “post-human” physical body, while others write of evolved social systems, as well.”

Can’t I do that right now without having to cut myself?

8 thoughts on “Beyond Human”