If you are in Chicago and get an opportunity to walk along Michigan Avenue you should pay attention to the Chicago Tribune headquarters. In the outside of the building they have stones embedded from historic locations worldwide. In the interior lobby they have statements engraved in the foyer. 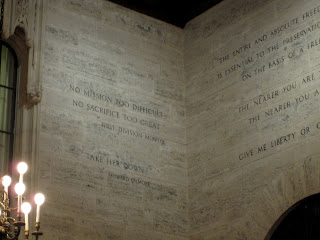 The Chicago Tribune building was built between World War One and World War Two. They have the motto of the First Infantry division, made famous in the first world war

No Mission Too Difficult, No Sacrifice Too Great

The history of the division can be found here at Wikipedia. In brief, they were part of the US forces that blunted the German offensive in 1918 when the other Allies (French, British) were crumbling, leading the victory at Cantigny and moving on to other costly battles through the remainder of 1918 until the armistice. During WW1 this division and their bravery and sacrifice were portrayed well by the media, indicated by the fact that this motto was carved on the wall and generally the public would not view this as an obscure fact.

The second quote would be obscure today even to most individuals reasonably acquainted with military history. As a teenager I read Blair’s “Silent Victory” which was an account of the US submarine offensive against Japan in WW2 so I recognized it.

Was the command made by the captain, Howard Gilmore, of a US submarine on a mission when his sub was severely damaged by a Japanese gunboat. The captain was wounded and still on the bridge; this order was essentially his death sentence because he was not going to be able to get into the sub in time to avert the Japanese ship. Gilmore received the highest US military honor, the Congressional Medal of Honor, for his bravery.

At its time the newspaper and radio were powerful forces for communication, as well as movies which took the place of television today as a visual medium. The US forces were portrayed well in combat and the media helped to promote the true heroism displayed by our soldiers.

It is interesting to think, today, if anyone can name any divisions’ motto or cite specific acts of bravery by individual US soldiers. While people go to great pains to say that they support the war, the media does not work the war into everyday stories as far as heroism, and Hollywood is even worse, focusing on the hunt for weapons of mass destruction rather than the day-to-day heroism of our soldiers on the front line. It isn’t a co-incidence that most of the movies about Iraq (are there any about Afghanistan, except for the excellent Restrepo?) have been flops (with the exception of the Hurt Locker) but we know no one in Hollywood is learning.