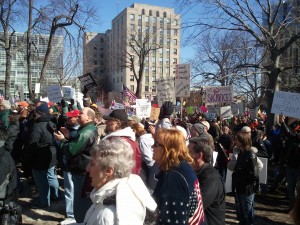 Compared to the ethnic mix of Chicago, where every race and ethnic group is visible in any crowd of any size, it is always weird to go to Wisconsin and see thousands of people who are all white on both sides of an issue. Not that there is anything wrong with that.

(Further observations and assessments of the protest / counter-protest in Madison below the fold.)

I went with Steve Stevlic and some other fine folks from the Chicago Tea Party Patriots.

In Alinskyite fashion, the opposition has personalized this whole thing, and made it about hostility to Gov. Scott Walker. As a result, after several days of protest with Walker shown with a Hitler moustache, the whole thing was reduced to the formula “pro-Walker” or “anti-Walker” or “pass the Bill” versus “kill the Bill.” Democracy requires everything to be reduced to the simplest slogans. Democratic resolution of major issues requires extreme over-simplifications You can’t get much simpler than “We Support Scott!” or “Kill the Bill!”

I don’t know how many people were there on the pro-Walker / pass-the-Bill side. Certainly thousands. Reports of ten thousand seem plausible to me. From my not-very-good vantage point, I think the anti-Walker numbers were about three times as high.

I was a little on edge going through the opposing crowd. But, despite the chant of “kill the bill” with its violent word “kill” — which it is OK for the other side to use, apparently — it was a peaceful event. There were a lot of cops out, and they seemed alert. I am sure that helped.

The Tea Party crowd was middle class-looking: normal, Midwestern, suburban. A very small number of people looked a little whacked on the pro-Bill side, which is inevitable at a gathering of this sort. It was a large, well-behaved mass of people who would probably prefer to be doing something else on a Saturday.

Madison is a very Lefty town that can turn out a mob of protesters for any “progressive” cause, including students who like that sort of thing and don’t have real jobs. (See Dan’s post.) And the unions have a hard, serious, cash-money stake in the outcome of this struggle. They are going to lose a lot of money if Walker and the GOP win. They are also going to lose the capacity to get more in the future if they lose their collective bargaining. I would expect them to be able to turn out a lot of people for a threat this serious. (Honesty, if I were them, I have no doubt I would have convinced myself that what I had was mine by right and I would be protesting and trying to protect what I have, too.) They have member lists and a budget for printed signs, buses, etc.

So of course you would expect the anti-Walker, anti-Bill side to get a huge turnout. It is pre-loaded.

Yet ordinary voters and taxpayers, who believe that the current path is leading the state to ruin, who support the Governor and the GOP, were able to assemble a sizeable crowd in response.

A few years ago, it would not have been possible. Steve told me that the Tea Party counter-protest was organized starting on Thursday with a Facebook page. Many people organized rides and carpools. We met a guy who had driven in from Minnesota. He was late and missed the speeches. But he was there. The tools now exist to put together something big very fast with minimal resources beyond committed people willing to devote the time and effort.

But even aside from organization, the issue of motivation is critical here. For the first time, with the economy in a meltdown and the government at all levels spending trillions of dollars it does not have, normal people with no special interest, are getting engaged. The public is paying attention and does not like what it sees. In a good economy, the public sector workforce was able to get decent pay and very good benefits and no one paid much attention. Now, with 10% of the country out of work (I think its higher) and 10% more underemployed (I think that is higher, too) people are seeing that the government workforce is getting a deal that is too good for what the public gets in return. Worse, it is seeing that this group has been absolutely unwilling to take some of the economic hit that the rest of the community is suffering through.

It is unfair, and taxpayers and business owners who do pay for it want it cut back. They want to spread the pain, and not impose higher taxes on themselves to sustain a quality of life for others that is now beyond the reach of ordinary, taxpaying citizens. Why should they?

This great mass of citizens is now mobilized. It is a political force whose strength and impact are going to continue and grow. It is the beginning of a mass movement that will be as big as anything that has ever happened in America.

However the Wisconsin situation ultimately plays out, the public sector workforce has not won many new friends for itself. They have acted entitled and wrapped themselves in a bogus claim of standing, is some vague way, for the poor and downtrodden and the progress of mankind. It is not true. They have no special moral claim to their economic advantages. They are not rich or powerful or bad people. They just have a good deal that the people who pay for it can no longer afford and no longer intend to pay for. And in hard times, their unwillingness to even make a gesture toward the hardship that the taxpaying public is paying, as strongly and clearly expressed in the elections last November will, I predict, come to be seen as a massive strategic error. Time will tell, but that is my prediction.

It is not clear to me that the way Walker and the GOP have done this was the best thing to do, or the best way to do it. But that now no longer matters. They have set a process in motion that has caused far more uproar than they probably bargained for, and they must now play it out to the end. All sides have hardened their positions and it is a zero-sum political championship grudge match. Both sides including Mr. Obama (who seems to jinx the causes he intervenes in) have put a ton of chips on this contest. One side or the other is going to win a victory that will have a major impact around the country.

Madison has become, as one of the speakers today said, “ground zero” for the reform movement which is struggling to control government spending.

As a practical matter, the election of last November cannot be undone by these protest-type actions.

The opposition to Walker and the GOP is not acting in a way that is likely to bring the center and the uncommitted to their side. They are probably not only facing defeat, but making the defeat worse by piling on. I sure hope so.

The flight of the Democrat senators adds an element of farce to the proceedings. I do not believe a majority of the public will be sympathetic to it.

The GOP and its Tea Party supporters should be able to win this.

(Personally, I don’t like rallies, protests, demonstrations. Speakers shouting into the microphone, to crowds chanting in response, are a civic ritual which I don’t really understand in any visceral way. But it is a part of the process, and it is expected. The Constitution guarantees the right of the people to peaceably assemble because that is meant to be part of the process. It is a show of numerical strength and commitment to an issue and a way of forming and showing solidarity. I understand that, and I wanted to add my physical presence to this important event. But I don’t enjoy it.)