Here is my final installment of my Saturday Night at the Protest. Photos and video below if you are interested.

The Capitol Building was trashed. And I don’t mean that there was a lot of trash laying around. The whole place had these handmade and pre-printed signs taped up all over it. It looks like sh!t. 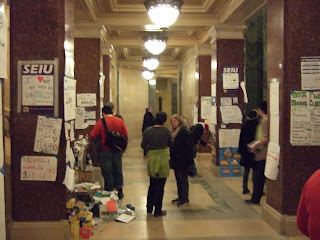 This dude looked to me to be intoxicated on…something. He was happy that people were leaving him alone to play his little game where you balance the thing on the…heck I have no clue. 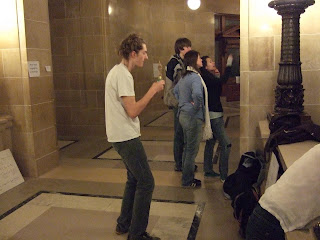 Some people weren’t too imaginative with their signs. 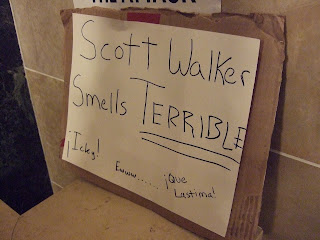 This guy must have agreed to spend the night at the capitol to get la!d. Just a guess. Probably accurate. I can’t imagine anything lower on my priority totem pole when I was in college than spending the night at a protest unless that was attached to a girl or booze or both, and in no particular order. 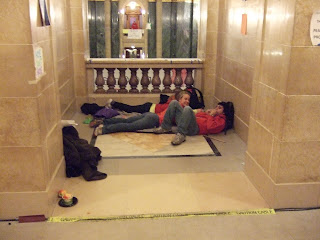 And here is my favorite protester of them all. One man, one mission. More on him in a bit. 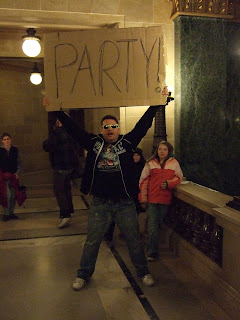 A local pizza joint put up an ad on facebook and people from anywhere, including out of state, could buy pizzas for the protesters that they would deliver to the capitol. Smart guys! I am sure they have made a killing this past week. 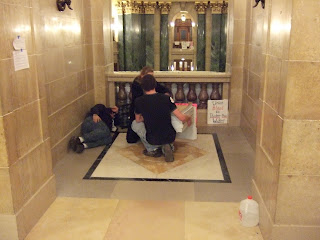 This was the shapeliest protester that I saw. I hope it is a female. As you can see, it is purple thong day at the capitol. 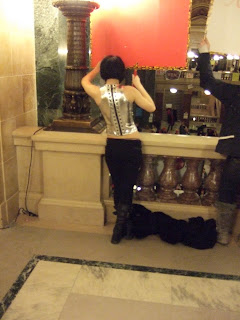 By far the largest security presence was at the entrance to the House and Senate chambers. You weren’t getting near. The cops were all very nice and answererd all of my stupid questions. 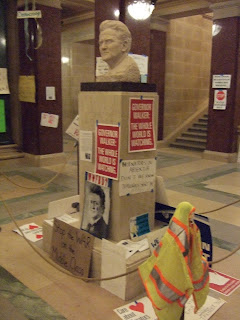 Here is the ragtag group making the noise from above. Toward the end, the guy with the PARTY! sign shows up and starts chanting USA USA USA for some reason known to nobody but him. My hero. You can see someone asking him “what the hell?”. Classic.

Here is a video to get an idea of the noise – it was terrifying. I literally do not understand how the people could stand it. At the 56 second mark I pose the question “Do you have any idea what he’s saying?” – the woman on my right blurted out “no” and the woman on my left said that you can hear him better when he is speaking this way. Again, note the sane people on the outside of the chanters doing nothing.

I had never been to anything like this before and learned a lot. Don’t believe all the nice video and photos you see on TV.

1 thought on “Saturday Night at the Protest, Part Two”