Dan and I recently traveled to San Francisco and visited the Military Vehicle Technology Foundation. This museum is privately owned (a foundation) and was founded by Mr. Jacques Littlefield, who sadly died in 2009 after a long battle with cancer.

The original intent of the museum was to restore the vehicles to original working order status – the restoration of the Panther tank (the only operating Panther tank in the US, I believe) was covered in a great TV show called “Tank Overhaul“.

The museum is in Portola Valley California; Dan and I were completely astounded as we ascended the windy hills near the estate to envision dragging 70 ton tanks up these roads. And yet they are all there, in buildings atop a hill.

In addition to the tanks there is a wide variety of period military equipment including machine guns and other gear from the era. The attention to detail from the facility is amazing. 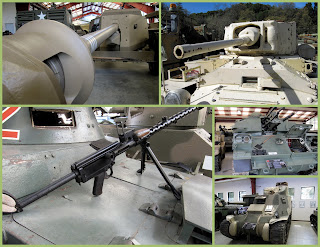 Upper left – 75mm German PAK anti-tank gun. As an Allied tanker you would not want to be on the receiving end of this. This AT gun is about as big as you can make it before it is essentially immobile because the crew is unable to traverse it unaccompanied. Upper right – the restored tanks are within the buildings and the un-restored tanks are out in the parking lot. This is a Valentine in un-restored condition, with the 2 pounder (40mm) gun that only shot AP rounds in the Western desert in WW2 for the British. Sadly after the death of Littlefield they are no longer restoring the tanks (this is incredibly expensive) instead they do park them out front for museum attendees like Dan and I to gawk at. Lower left – this is an MG34 German machine gun (a fantastic design) on the rear deck of the German PZ1 armed only with 2 machine guns. Right middle – this is a Soviet anti aircraft tank post war; it is notable because I think this is the same tank that Gaddafi is using to slaughter his citizens rising up against his dictatorship. Lower right – the US Grant, with the 75mm gun in the hull and 37mm on top; the British removed the top cupola and called it the Lee. Another fantastic restoration.

One other element of the visit that was fantastic was the tour guides or docents; they were either the mechanics that restored the tanks or ex-tankers themselves. They had a very humorous approach to the failures of the post war US tanks and how they were designed “in a bar”. They also gave many examples of life inside a tank and how the Soviets used left handed gunners that were under 5′ 4″, for example, to fit in their low profile vehicles.

If you are in the region I highly recommend that you attend the tour; it is well worth the $20 entry fee.