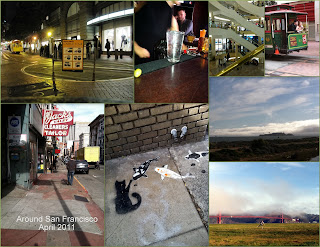 Recently Dan and I took a trip to San Francisco to run in the Presidio 10 across the Golden Gate bridge (they don’t close the bridge to car traffic like they do for the “Bay to Breakers” race but there is plenty of room to run on the sidewalk). Unfortunately I was unable to run but went anyways and Dan did well and was happy with his time.

Upper left – the ubiquitous Powell street cable cars. I don’t know if this is classified more as a “tourist attraction” or as a means of public transport. The sign shows all the “don’ts” especially for out-of-towners. Upper mid-left – we were at the Owl Tree bar which had great drinks on tap and the Ukrainian waitress made very strong drinks; this glass was pure alcohol and destined to be two martinis. Upper mid-right – there was an amazing shopping mall near the Powell street transit station which was packed to the rafters; it was as if the recession had never occurred. Dan and I were joking that everyone buying there came from a country with a positive trade balance. Upper right – a happy newlywed couple in a Powell street cable car. Lower left – Dan doing his version of the “Boulevard of Broken Dreams”. Lower mid – someone is drawing on the sidewalk with Koi fish as well as a playful cat. Middle right – Alcatraz Island. Lower right – stretching before the race in front of the Golden Gate bridge.

8 thoughts on “Around San Francisco April 2011”