I spent the past six months reading about Calvin Coolidge. I was interested in why the 1920s were a period of great prosperity and why the severe recession/ depression of 1920-1921 was so short. At its peak, there was 25% unemployment. Gross domestic product dropped by 6.9% in one report.

The recession of 1920–21 was characterized by extreme deflation — the largest one-year percentage decline in around 140 years of data.[2] The Department of Commerce estimates 18% deflation, Balke and Gordon estimate 13% deflation, and Romer estimates 14.8% deflation. The drop in wholesale prices was even more severe, falling by 36.8%, the most severe drop since the American Revolutionary War. This is worse than any year during the Great Depression (adding all the years of the Great Depression together, however, yields more severe deflation). The deflation of 1920–21 was extreme in absolute terms, and also unusually extreme given the relatively small decline in gross domestic product.[2]

The Harding-Coolidge administration took office in March 1921 and the recession was over in months. Why ? Governments were smaller then and had less influence on the economy. The Wilson Administration has been widely described as the equivalent of a fascist regime with its war time controls and economic meddling. Again from the Wikipedia article:

Interpretations of the end

Austrian School economists and historians argue that the 1921 recession was a necessary market correction, required to engineer the massive realignments required of private business and industry following the end of the War. Libertarian Austrian School historian Thomas Woods argues that President Harding’s laissez-faire economic policies during the 1920-21 recession, combined with a coordinated aggressive policy of rapid government downsizing, had a direct influence (mostly through intentional non-influence) on the rapid and widespread private-sector recovery.[12] Woods argued that, as there existed massive distortions in private markets due to government economic influence related to World War I, an equally massive “correction” to the distortions needed to occur as quickly as possible to realign investment and consumption with the new peace-time economic environment.

Daniel Kuehn’s recent research demonstrates that Woods gets many of the facts of the 1920-21 recession wrong.[13] The most substantial downsizing of government was attributable to the Wilson administration, and occurred well before the onset of the 1920-21 recession. The Harding administration raised taxes in 1921 by expanding the tax base considerably at the same time that it lowered rates. Kuehn also points out that Woods underemphasizes the role the monetary stimulus played in reviving the depressed economy. Since the 1920-21 recession was not characterized by any aggregate demand deficiency, fiscal stimulus was entirely unwarranted.
[edit]

I would tend to doubt the “recent research” that tries to include Keynes’ theories in the explanation. The issue of Fascism is more interesting. The National Recovery Administration was probably the most openly fascist bureaucratic organization that the US government ever instituted. It was eventually overturned by the Supreme Court, prompting Roosevelt’s “court packing” scheme. (A very sympathetic version by PBS).

What then, led to the Depression and what is leading to the present frightening echo of 1933? Here is a very worrisome chart. 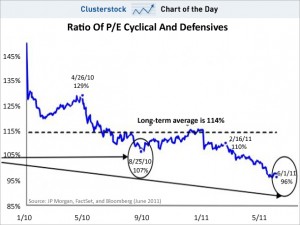 Here is a chart showing the price/earnings ratios of cyclical stocks vs “defensive stocks.” What it shows is that cyclical stocks, that can be expected to respond to economic conditions, are very, very cheap. That looks like most people do not expect recovery any time soon. Why ? 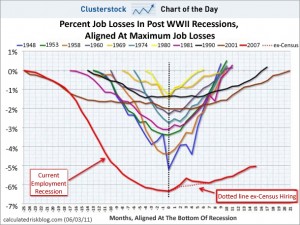 This is a very frightening chart. It has been so for months as no prior recession has shown this deep a fall in employment and this slow a recovery. Now, if you look at the end of the red line, you see that employment is not recovering at all. The line is flat.

Calvin Coolidge has been criticized in history for his pro-business sentiments expressed in words. He is alleged to have said, “The business of America is business.” In fact, that is not an accurate quote but the sentiment he expressed was similar. He was also quoted as saying something like “A man who builds a factory, builds a temple and those who work there, worship there.” He has been widely criticized for those statements, as if praising business was immoral.

What we have now is a president who makes statements like, “So if somebody wants to build a coal-powered plant, they can; it’s just that it will bankrupt them because they’re going to be charged a huge sum for all that greenhouse gas that’s being emitted.”

We have a president who tells would-be entrepreneurs that “I do think at a certain point you’ve made enough money.”

Some have blamed Coolidge for the 1929 crash but it is pretty clear that the problem was similar to the problem of the real estate bubble in 2005. The Federal Reserve kept interest rates too low for too long. In 1928, Coolidge did not feel he had the right to intervene with the Fed and Benjamin Strong, who was the president of the New York Fed, died that year. In 2005, Alan Greenspan still believed that a real estate bubble was preferable to a correction from the 1990s internet bubble. George Bush may have had more ability to intervene but all the safety mechanisms, which had not existed in 1929, still failed.

We are on the path to another Depression. One small indication. I do reviews of workers compensation claims. One would expect that, early in a severe recession, claims would go up as workers anticipate layoffs and try to file claims. There was a bit of that but it is over. Employment in California is down so far that the State Compensation Insurance Fund is laying off doctors and closing offices. Claims are way down because employment is falling rapidly. Workers may be afraid to file claims now.

20 thoughts on “Why I like Coolidge and why we are not recovering.”