This post at Technology Review muses about what happens if high tech crashes. Would our store of technical knowledge, which is increasingly found exclusively in digital form, survive? Or would we suffer a terrible backwards slide as people struggle to reinvent what was once taken for granted?

Glenn takes this to its logical conclusion, saying that there should be efforts to build an Encyclopedia Galactica. A vast repository of knowledge, the sum total of everything known up to this time, could be printed in a durable form and cached in a remote area. If any of the myriad civilization-smashing dooms should come to pass, then there would be a base of knowledge that would allow the survivors to rebuild in a very short period of time.

This dovetails neatly into the Social Cycle Theory of history, a discredited model that states flourishing civilizations are doomed to descend into periods of darkness and barbarism. Vast libraries might be constructed in cosmopolitan cities where culture and knowledge are revered, but those same books filling the libraries are going to be burned by illiterate savages when they sack the toppled empires.

So, if it is impossible to avoid the total destruction of all you hold dear, wouldn’t it be neato-keen to squirrel enough knowledge away so that the contributions made by your culture to the human condition are not lost?

There actually has been at least one effort to do this very thing that I am aware of. Known as the Georgia Guidestones, they are massive slabs of rock arranged in such a way that many are reminded of Stonehenge. 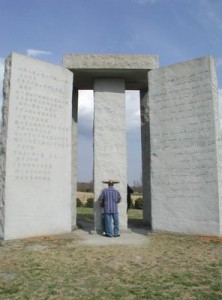 The stones were erected by a local company in 1980, the money for the project coming from a mysterious individual who insisted upon total anonymity. To this day, no one is sure who is behind all this.

But, interesting though this might be, there are some serious flaws with the Georgia Guidestones. The first being that they are located just a few miles outside of a town in Georgia, are easily visible from a major road running nearby, and are accessible by the public at any time. This has led, sadly but predictably, to acts of vandalism. 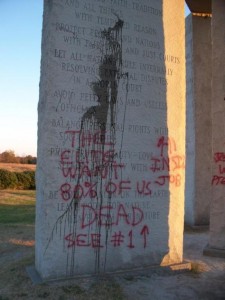 Obviously, any storehouse of knowledge would have to be located far enough away from centers of population to survive the rampaging hordes as civilization crashed and burned. The Guidestones are just too accessible.

The other problem lies with the inscriptions etched into the stone, which are little more than New Age platitudes slathered with a healthy helping of anti-Humanity environmentalism. The best way to illustrate the uselessness and self-indulgent nature of the inscriptions is to mention that Yoko Ono has praised them as a ”a stirring call to rational thinking.”

The really important stuff needed to rebuild civilization, such as a step-by-step guide to animal husbandry, crop rotation, and the Germ Theory of Disease, are prominently absent. Supposedly the mundane, nitty-gritty details of how to feed yourself and avoid dying from dysentery are to be found in a time capsule that is supposedly buried underneath the slabs. Unless the capsule consists of several freight cars packed full of books, entire libraries shrink wrapped in plastic one meter thick and encased in a concrete vault, something tells me that the whole thing is a colossal waste of time and resources.

This isn’t to say that a project to preserve the knowledge necessary to jump start civilization is a bad one, if for no other reason that it would generate some interesting new methods for storing data so it would be available millennia hence. You can find a list of such projects, both practical and proposed, at this link.

Note, if you will, that the people behind these knowledge preservation schemes are more interested in guarding culture than passing on actual techniques needed to survive the savage and harsh landscape that would be present after our civilization fell. This strikes me as being unreasonable to the point of madness!

Instead of all this artsy-fartsy crap about being kind to Mother Earth and melding human law with tolerance, someone who was actually interested in preserving culture, civilization, and lives would go about it in a different way. They would bury a large cache of seed corn, basic tools and the means to produce more, single-shot rifles and shotguns with ammunition, and a bunch of manuals printed up by 4-H designed to instruct young farmers in the details of their profession.

Something tells me that I would never be able to get anyone rich enough to fund the project interested. After all, since I am talking about hard physical labor and guns, Yoko Ono would be sure to be against the whole thing!

9 thoughts on “Backing Up The Hard Drive Of Civilization”