The current administration has continually protested the lower rates signed into law by the previous administration and initially acted as if there was no impact on behavior based on the act of raising tax rates.

However, the administration IS interested in getting re-elected. Thus some new “incentives” have been put into place to incent economic activity, such as a tax credit for capital expenditures that makes them completely deductible in the current year. Since large capital expenditures are usually deducted over many years, this is a significant one-time tax holiday that major companies will consider seriously while planning for uses of their free cash flows (or available financing).

This tax credit, however, is diametrically at odds with the administration getting re-elected, because it provides FURTHER encouragement for companies to replace people with automation. And as the jobless rate remains high, the government starts casting about for more solutions to a problem that they really care about, which is getting people back to work so they aren’t disaffected voters (never mind the deficit, the total economy, or other factors).

While the government tried to make labor a bit less un-favorable with a social security tax holiday, the 2% is on the employee side (yes, yes, I know that this factors into wages in the long run, but not in the short or medium term), this type of change isn’t going to make businesses hire more in the short term. 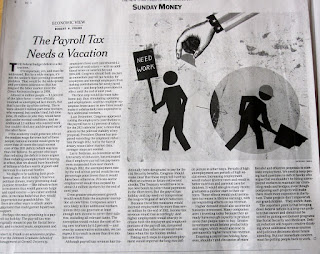 Thus now the government has decided to look at other incentives to try to get companies to hire people, such as a more extensive payroll tax holiday, as they discuss in this NY Times op ed piece.

The administration apparently doesn’t feel any uneasiness with the blatant contradictions in their policies; officially they say that raising taxes “on the rich” doesn’t incent behavior, but here they are starting to see that businesses DO respond to incentives, and that in order to try to get businesses to hire they might want to use tax policies to further this end.

In fact, our tax policies are a complete mess. Not only do businesses want a fair tax climate, they want a PREDICTABLE tax climate. Since businesses are (all) run by high net worth individuals, it also makes sense to have a predictable tax climate for businesses as well as individuals. No one would have foreseen that we would go an entire year without an estate policy; think of all the years of lawyers and various “shifting” transactions that could have been avoided. Likewise, this one time tax break for capital is something that businesses will have to consider for years to come; perhaps the best bet is just to wait to invest until a better tax deal comes along.

I would love to hear the administration explain why taxes DO incent behavior sometimes (like when the administration wants you to hire people) but DON’T incent behaviors at other times (like when they raise rates and expect you to work just as hard as you did before and keep investing and hustling for years to come, knowing that a large chunk of it is going to go to the government in taxes). That would be a good you tube for Goolsbee. (also hilarious that when you put in his name the auto-correct in my computer comes up Goebbels).

5 thoughts on “Waking Up to the Behavioral Impact of Taxes”