There is a large anti-Assad (Bashar al-Assad to be specific) occurring today in River North in Chicago. The rally is supported by many organizations as detailed here. The plight of civilians in Syria is horrible and the true colors of the Assad regime are unfortunately coming through. 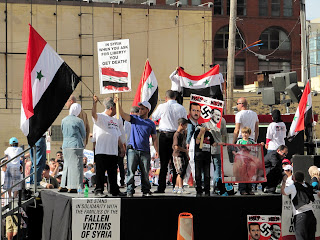 The rally had speakers from the community and people driving by honked their support. If for some reason you aren’t aware of the situation in Syria there is a massive popular revolt and the government is using shocking force on the civilian population, including tanks, artillery, and other heavy weapons on basically an unarmed populace consisting of their own citizens. 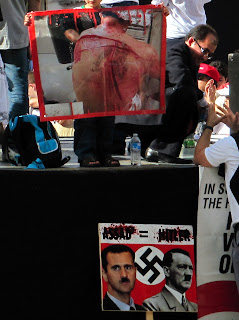 Generally when people compare “X” to Hitler the comparisons are over-wrought. In the case of Bashar al-Assad, however, at least you can understand where the protesters are coming from. I also think that the “Hitler” reference is meant to jolt people into at least considering their plight. 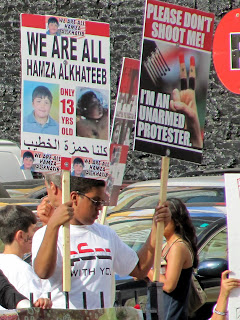 The incident with a 13 year old child Hamza is cited on this protest sign; he was apparently tortured to death in a horrible manner that I won’t cite here but you can read anywhere on the internet for more information. One of the Chicago Boyz commenters said “this was bad even for an Arab country”. From my perspective not only was it evil it represented shockingly poor tactics for Bashar; it is incomprehensible what this could accomplish. 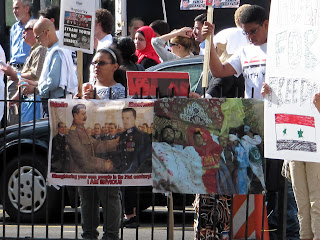 Here and at Chicago Boyz we are keen commenters on history so any time you compare someone to Stalin it also gets us interested; I think that the Stalin references are also relevant since Russia is blocking security council action (along with China) on Syria.