A couple of years ago I went to the Chicago auto show with my brother and he follows new cars quite closely. His summary on Ford was: 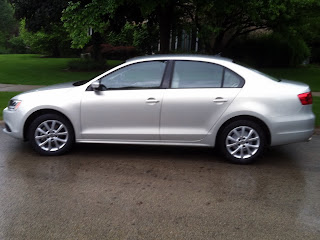 Recently I bought a 2011 Jetta. The base Jetta starts at just under $16,000; a minimally equipped one is about $17,000 and the style I bought is about $20,000. Volkswagen is pricing this car very aggressively, attempting to take market share from US and Japanese manufacturers. The Jetta I bought is built in Mexico; VW just opened a plant in Tennessee, where of course it is non-union in a right to work state, to build the Passat. VW used to assemble cars in the USA back in the 70’s and 80’s in Pennsylvania, and the linked MSNBC article summarized the outcome:

Aiming to challenge even the domestic makers, VW opened up a plant in Westmoreland, Pa., and began preparing a second factory in suburban Detroit. But the twin oil shocks of the ’70s, rather than boosting demand for Volkswagen, opened the door for its Asian rivals. Demand began to slump, especially when Japanese makers like Toyota shifted focus from fuel economy to quality, VW’s Achilles’ heel. Sales plunging, the maker decided to scuttle the second plant before it opened. Then it closed Westmoreland, where constant battles with the union drove up wages and prevented the implementation of much-needed steps to improve quality.

No non “Big Three” auto maker would ever consider making any sort of investment in a union state in the USA for fear that they would be dragged down into the same UAW demise that took down the US auto makers and almost Ford, too. VW has clearly learned their lesson and is opening their plant far away from the UAW agitators. Also from that article:

But as with the Jetta it will be cheaper than the model it replaces. The new Passat is expected to carry a base price of about $20,000. That’s roughly $8,000 less than the current version, which should make it more competitive with Asian and Detroit models such as the Toyota Camry and Ford Fusion.

One of the ways in which VW is making these new cars price-competitive is through reduced labor costs. Per the article:

VW also should save as much as $500 or more per vehicle simply by paying $25 an hour for its Tennessee workers — including wages and benefits. That’s less than half what workers cost manufacturers at a Big Three plant or one of the so-called Japanese “transplant” assembly lines. VW plans to boost its wages by a third over the next three years, bringing total labor costs to $38 an hour, but that’s still significantly less than much of its competition.

Another advantage of VW’s higher profile here is the fact that their cars can “step up” into the Audi line. In the past I heard horror stories about Audi reliability but if I have a good experience with my VW on that dimension I will be inclined to move up to the Audi lineup, which goes all the way up to some of the most high performance cars in the world.

So what are Ford’s unions doing to help their employer prepare for the new, low-cost competitor? And one who has a line up that is upscale and can entice auto buyers to stay within the VW / Audi “family” for years to come?

Demanding higher wages, of course. This article from the Chicago Tribune titled “Ford, UAW gear up for negotiations” summarizes the initial contract positioning:

As the United Auto Workers union and Ford Motor Co. kick off contract talks, union representatives are expected to push Ford to restore a vacation day, cost of living adjustments and bonuses that they gave up in 2009 to help keep the company financially stable.

Of course. As long as the company is alive, the UAW wants to extract every drop of value and potential value from the carcass. Per the article, here are the wage gaps BEFORE the negotiations:

Ford maintains that the two-tier pay system and the temporary workers are needed. That system and creation of health care funds for retired workers managed by the UAW have allowed Ford to lower labor costs — wages and benefits — per employee to $58 per hour, or $17 less per hour than in 2007. Ford said those savings narrowed the labor cost gap with its foreign competitors to $8 per hour from $27 per hour.

Um… of course they were comparing against the existing competitors, which Ford is trying to get near, and not the NEW competitors like VW, which blows away Ford and the UAW in terms of labor costs.

Let’s put it another way… Ford is happy to average $58 / hr and hopes to barely keep it (if they can keep the current deal terms with the union), while VW in Tennessee is at $25 / hr and plans to increase this to $38 / hr. That is a severe disadvantage.

One element that is completely absent from even the most pro-union, UAW materials or articles, is that traditional shibboleth that somehow unions produce higher quality cars. The foreign transplants have built plants throughout the south and in right-to-work areas and no one has ever shown that their quality is compromised in any way by the absence of a union; in fact you likely could graph and show that having a union is inversely correlated with quality (unions are obviously inversely correlated with profitability at the parent company).

It is astonishing to me how the fact that the unions are killing all of the “blue” states isn’t a completely obvious and talked-about fact; all incremental investment that could possibly be done over the last few decades was either overseas or in non-union states. All of that investment COULD have benefited Michigan or Illinois or Wisconsin or Pennsylvania (in the case of VW, where they had a manufacturing base) – but instead it went to the US south, or overseas.

They are just strangling the life out of the remaining US manufacturers that took US government funding (GM, Chrysler) to survive and Ford, the only one that didn’t take the money, has to move to a high-cost model just to attempt to recoup a profit after paying above-market wages (for work quality that is no better than is found elsewhere).

New competitive entrants like VW will tilt the playing field ever further from the union states. I am certain that their will be “no learning” from these unions until their once proud cities turn to grasslands, like Detroit today and the old South Works plant in Chicago.

15 thoughts on “Unions and Ford”