Today the US government basically controls the US mortgage market for housing. Per this article in the WSJ “Government Stays Glued To Mortgage Market” in the WSJ:

The government took over Fannie and Freddie in 2008 to prop up the housing sector, and taxpayers are on the hook for $138 billion…Together with the Federal Housing Administration and federal agencies, Fannie and Freddie are behind nine in 10 new mortgages.

The US government increased the limit on the dollar amount that these agencies can issue in order to keep housing prices from collapsing; now, much to the bewailing of the real estate industry, they are looking to tighten those limits. 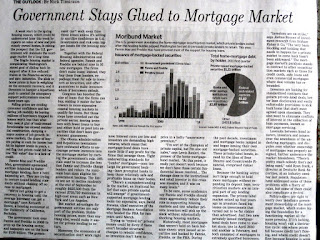 Unfortunately, if the US government stops supporting loans, there aren’t going to be many new loans at all. If you attempt to get a mortgage that isn’t covered by one of these Federal agencies, expect to see a very large down payment, a higher interest rate, and to have sterling credit in order to close the loan.

Some regions are moving to cash in order to “clear the market”. In Miami 64% of transactions were “all cash”, with foreign buyers comprising the majority of the sales.

If you think about it, the “classic” thirty year loan, with a locked in rate, and the ability to exit the loan if rates decline(through re-financing) but the ability to keep the loan if rates rise (thereby someone else is essentially taking the loss) is not a product that would be offered at all today if the private market was in charge. And these products would be even more exotic with the small down payments (3% – 5%) required by the US government agencies.

The private lenders are not even in the market now; they are all locked in struggles over past mortgage losses and securitization and being hounded by lawyers and regulators over what happened during the “boom years” up to 2007. Recently JP Morgan Chase under Jamie Dimon (one of the smartest guys in the banking business) pledged to exit the market in their latest conference call:

JPMorgan Chase is gradually reducing its mortgage portfolio to “close to zero” as it reviews mortgage losses and works through litigation over loan-servicing and foreclosure practices, Bloomberg News reported.

Back to the original WSJ article – the US government is hoping that the private sector will re-enter the market so that Fannie and Freddie and the FHA can “step back” from being the only game in town:

“There’s a misunderstanding in the market, an irrational belief that says private capital will emerge” if government-supported mortgage lending looks too expensive, says David Stevens, chief executive of the Mortgage Bankers Association who headed the FHA for two years until March. Trying to “crowd-in” private money could be dicey if there aren’t broader structural changes to rebuild confidence, so investors don’t have to price in a hefty “uncertainty premium.” “I’m sort of the champion of private capital, but I’m also not naïve,” says Lewis Ranieri, the pioneer of the home-mortgage-bond market. “At this point, it really just doesn’t work because we don’t have those certain fundamental issues resolved…. The damage done to the institutional and retail investor in this crisis was massive, and it was on many levels.”

If the government is truly serious about reducing the size of their intervention in the US mortgage market there will be major consequences. You can assume, based on Dimon’s recent activities, that while the big banks are still stuck with lawsuits and fallout from the real estate bubble, very little private capital will “rush in” to offer products that the US government offers today. Thus if you are trying to sell a house for more than the government sponsored maximum (271k in most areas, 410k in high cost areas, more in CA and NYC), you are going to have a harder time finding a mortgage, and it won’t be a low down payment mortgage, for certain.

There likely will be a bad “middle” segment of the market of homes more than the government loan limits but less than the “rich” segment that is marketed to high income buyers (who often will pay cash, anyways). This “middle” will get squeezed more and more as the government reduces the limits listed above, which they are trying to do (or at least get them back to where they started in NYC and CA before the markets seized up).

In all cash markets that appeal to foreigners, like Miami, or even downtown Chicago (there are many high end condos), properties should be aimed towards these all-cash buyers. I don’t know what they are looking for, but if you are building new condos or trying to sell an existing one, it would be useful to look at it from their perspective.

The mid priced markets (comparatively) will suffer as those trying to buy houses above the limit will find mortgages hard to get and expensive. This will impact home values, especially if the seller has a home that is hard to finance and he wants to sell his current home before he buys a new one (a contingent sale).

I’m not an expert on this but the consequences are going to be significant. There is no one stepping into the void as the government exits on a large scale; loans will always be there, but pretty much for “those that don’t need them” – people who can afford big down payments, have sterling credit, and even other assets that they can fall back on.

Lack of loan availability will put pressure on prices; and as people start to figure out that building new homes for more than can be readily financed (through the government) they will stop building new ones; profit margins are higher on luxury homes and it takes a lot more smaller homes to make the same money (those that qualify for the government loan terms).