Lollapalooza 2011 is happening now at Grant Park in Chicago. Friday was the first day and it was HOT during the day (and not too terrible late in the evening). 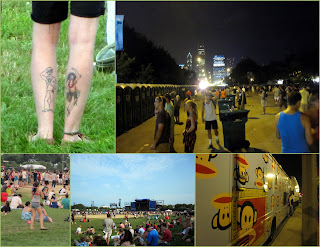 Lollapalooza always has interesting people to watch. Upper left – no idea why you’d want a tattoo of a sailor on one leg and a Hawaiian dancing girl on the other leg or what that might signify. Upper right – they have an amazing row of portable toilets, stretching as far as the eye can see. This is mid-set at Muse; around 8pm (when everyone was trying to get in before the headliners I heard the lines were 10 deep at every single one of them). While not related to this post my favorite porta-john links are right here. Lower left – the girl was very dedicated to her hula hoop. She “hooped” all afternoon and into the night, when it lit up. She didn’t seem to talk to anyone, this was her “gig”. Lower middle – trying to beat the heat and stay out of the sun on the slope by the south stage near the cabanas for the rich and famous. Lower right – monkey bus on the way out. 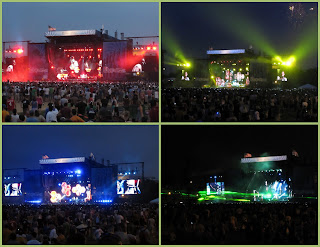 Muse was the headliner on the South main stage. They started their set off with a huge 1-2-3 punch of “Uprising”, “Supermassive Black Hole” and “Hysteria” (one of my favorite songs) and the crowd was rocking. The tempo slacked off mid-show as they played a lot of slower songs from their new album but it picked up before the encore with “Resistance”, “Time is Running Out”, “Starlight” and “Stockholm Syndrome”. If you are ever wondering about what an artist played at any concert anywhere check out setlist.fm which is amazingly detailed and interesting. There were fireworks for the 2nd and 3rd songs which I thought was cool but it turns out it was from Soldier’s Field from the disastrous Bears Family Fest fiasco. 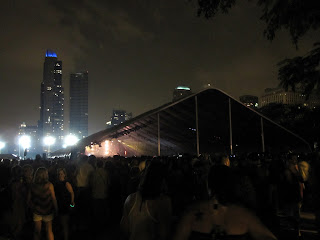 The action for all the young kids, however, was at “Perry’s” the DJ tent. The tent was massive and has to be seen to be believed; in prior years’ it was small and most of the revelers were out in the open; dancing around in the blazing sun with no cover wasn’t much fun. “Girl Talk” played and the crowd was going crazy; I am a fan of that band (really just one guy mixing tracks together) and the fans seemed to be having a great time, dancing everywhere. Frankly most of the traditional “bands” seemed to not be reaching the fans like this dance music was doing.