, takes the reader on a tour through the sprawling, wasteful, oppressive and destructive mess that we are all paying for upon pain of imprisonment.

Most readers of this blog are of a conservative or libertarian disposition already. Our inclination is to see the government, as presently constituted, as a ruinous burden on the economy, and a noxious growth choking out our freedom and our future prospects. Iain Murray’s book provides facts and evidence, and many anecdotes, demonstrating the accuracy of this view. If anything, by the detail and specificity of his depiction, he shows that things are worse than I thought, which is an achievement. 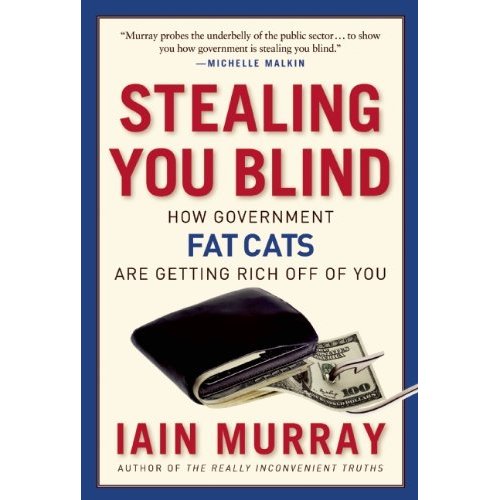 Murray demonstrates that government employment has, in recent decades, ceased to be a subpar way of making a living. Government employees are very well paid (one and a half to two times their private sector equivalents), enjoy excellent health and retirement benefits, and have job security beyond the dreams of private sector workers. Further, these jobs are often not particularly strenuous. “Government workers all over the nation are enjoying a better standard of living than the people who are paying them.”

Murray shows that government employees have become an organized class of many millions of people which has interests antagonistic to the rest of us. If you add in contractors and grantees, the total is upwards of 14.6 million people at the federal level alone. Pile in state and local and “we reach the astonishing conclusion that close to 40 million Americans are employed in some way on government business” — about 26% of the labor force. Even if you think we should have a large, well-funded government, that is too many.

But it gets much, much worse. The activities engaged in by this massive and well-compensated class of people are generally economically regressive and destructive. We are paying a fortune, and mortgaging our future, to see value destroyed instead of created, and prospects and prosperity thwarted. The cost of compliance with government regulation is increasing at an accelerating rate, Murray cites a figure of $1.7 trillion as the cost of compliance to the entire economy in 2010 — which is grossly equivalent to total corporate pre-tax profits. (Agencies generate their own make-believe numbers about the purported benefits of their activities.) The power of the administrative state is incessantly eroding our liberties, with Constitutional guarantees of due process and against unreasonable searches and seizures withering away. This powerful administrative machinery is constantly being captured by businesses that profit from it. Agency by agency, Murray shows these same processes occurring.

Murray shows how there are “special interests backing the bureaucrats in just about every case of regulation.” Support for legislation leads to campaign contributions. Individuals move between the regulatory agency, the regulated industry and lobbying groups — Murray provides numerous egregious examples. These individuals, at the top of the pyramid, function almost as an entitled aristocracy, with little to justify their power and privileges.

After this painful pilgrimage pessimism would appear to be appropriate.

But Murray does not abandon us in the bowels of the inferno. In his concluding chapter he offers a detailed list of suggestions about effecting an exit from this mess we have gotten ourselves into — shrinking the federal government, rechartering executive agencies, reforming government employee compensation, and several others, all worthy ideas. Murray’s list of proposed reforms is entirely convincing to me. But I have believed in this sort of thing all of my life. Having the already-convinced say “right on, Iain” is not enough. The challenge is to make this type of thinking a majority view.

Murray’s proposed reform measures must have political impetus on a mass scale or they will remain a blackboard exercise. The incumbents and beneficiaries of the existing regime will not be defeated by ad hoc and sporadic opposition. However, Iain Murray does not focus on the question of creating political support for his proposed agenda which, to be fair, is beyond the scope of his book. The one hint he makes in this direction is his comment that Mrs. Thatcher made a grave mistake when she failed to privatize the BBC, “which, with its dominant state-supported status on the radio and television airwaves, has become a tool for the bureaucracy to perpetuate itself, promulgating leftist views and indoctrinating the British public with the idea that Thatcherism is evil.” We have a similar problem here, but with the MSM is much less dominant than the BBC, and in the USA we see a greater scope and reach of alternative and pro-reform media. The ongoing indoctrination of the American people, however, is a huge obstacle to positive change, and is the one thing that occasionally makes me think we will not succeed in turning things around before we suffer a very painful systemic crash.

Nonetheless, there are grounds for hope. Fortunately, we are living in the midst of a growing realization that the existing order is not only ineffective and ruinous, but is also doomed. What cannot go on will not go on. The Tea Party is one manifestation of this growing awareness and growing activism. If the incumbent power centers manage to vilify the Tea Party sufficiently, to poison the brand, they will merely cause a change of label. Tainting a label cannot change the underlying substance, the growth of political awareness, organization and mobilization, which is going to lead to substantial reform of the existing order.

I highly recommend this book to everyone who is interested in the issues of freedom, government power, and political reform of the existing power structure. The strength of Stealing You Blind lies in its quantification, vivid details and illustrative anecdotes, which a short review cannot capture. It will strengthen the convictions of readers of this blog. It may change the mind of readers who are open-minded, who are not already ideologically or professionally committed to the existing way of doing business.

Full disclosure, I received a review copy. However, I can truthfully say that I would have paid full price for this book and have gotten my money’s worth. Buy a copy, read it, then give it away to someone who will learn and benefit from it.

Here are his posts on the NRO Corner.

This is an interview of Murray by Glenn Reynolds.

6 thoughts on “Iain Murray, Stealing You Blind: How Government Fat Cats Are Getting Rich Off of You”