When in Norway recently I focused on what any typical traveler would find interesting… their overhead power lines. 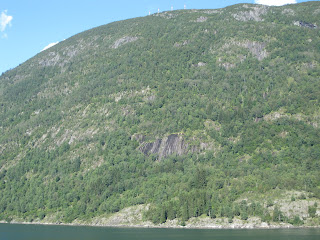 We took a ferry in the fjord in the area of Norway west of Bergen, the 2nd largest city in the country. Off in the distance I could see the pylons, and since the fjords are so steep and tall they looked very tiny in perspective. 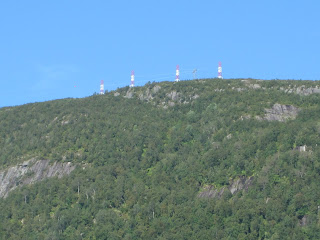 Since Norway is blessed with immense amounts of hydropower, they have little need for conventional fueled plants. Hydro power is the most significant of the “alternative” generation assets (as opposed to the more “hip” wind or solar power sources), and once built the costs to “run” the site are very low (although the glacial debris does damage the generators; they had an exhibit in their “glacier museum” that showed the impact). 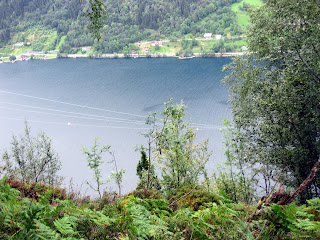 Here are the lines over the amazingly scenic city of Balastrand. We hiked up to the top of a local hill and I took the opportunity to snap a photo of the lines.

Even though these power lines seemed to be all over the fjords, locals in other parts of Norway were opposed to continuing these types of overhead transmission lines. The city of Bergen and the country’s largest gas processing plant (natural gas is the primary reason for the country’s current wealth and Bergen is a major city) require additional power for their growth. Per this article in the NY Times titled “Opposition to Power Line At Fjord Runs Deep“:

While the overhead power lines would cost $152 million, by the government’s estimate, Mr. Borgen of Statnett says a combination of an underwater cable and high tension lines would cost four times as much. Nevertheless, most people in Norheimsund and surrounding areas like the underwater solution. Atle Kvamme, of the local Chamber of Commerce, said the most important thing was for the Bergen region to have enough power. Yet, he added: “We are a rich nation. We can afford to build in the sea.”

What I find interesting is that nowhere in the article does the NY Times talk about how ridiculous it is to waste over $450 million (the additional cost for overhead lines) when 1) there are already many lines over fjords and they haven’t stopped tourism or damaged the quality of life 2) there are many other better uses in the world for this kind of money. The article does mention that the underwater lines, in addition to costing 4x as much, are more prone to failure (don’t forget that those fjords are DEEP).

What kind of hubris does it take to demand that $450m in additional funds to be wasted for a less reliable solution? Well the NIMBY type of hubris, the type that stops progress in the name of conservation and ignores that money wasted on this type of “investment” could be better spent (or not spent at all) on virtually anything else.

This episode at least has a happy ending. Despite the opposition from a few greens, the power lines went ahead. Sadly enough, it is easier to get things done in Norway than it is in the USA.