The recent edition of “Parade” magazine when I saw a list of things that you can do to help others in need. I was struck by their plea to “Feed Hungry Children in Oregon” where they said that

Oregon has the nation’s highest rate of “child food insecurity.” About 252,000 kids – or nearly 30% of the state’s youth – aren’t sure where their next meal is coming from. 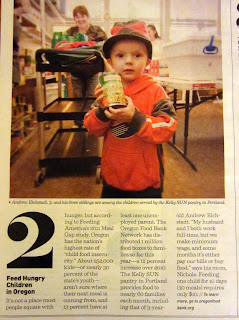 This surprised me because I never thought of Oregon as a state that had this sort of poverty. The example they gave in the article was as follows:

My husband and I both work full-time, but we make minimum wage, and some months it’s either pay our bills or buy food, says his mom, Nichole (her child is featured in the photo, above).

While this is a sad and heart rending story, there is another connection as to why their parents are having a hard time finding higher wage work. Per the Tax Foundation:

Oregon’s personal income tax system consists of five separate brackets with a top rate of 11% kicking in at an income level of $250,000. That rate ranks the highest among all states levying an individual income tax.

While tax policy may seem arcane to individuals worrying about food security, it is important to realize the CRUCIAL impact that state income tax rates play in state competitiveness. Of all the components of a tax burden, the ONE element that can be most easily modified or avoided is the personal income tax levied by a particular state. For instance, if you earn $1M a year, you’d be paying about $75,000 more in tax in Oregon than you would in Texas, Florida, Nevada, or other states that don’t levy a personal income tax (it isn’t $1M times 11% because of the graduated nature of the tax up to $250,000 and the fact that state taxes are deductible on Federal returns, so the $75,000 is a rough estimate).

A high marginal personal income tax rate falls DIRECTLY on those most likely to invest in a business that would hire someone like the family in this photo. A high marginal tax is analogous to seeking out the very individuals that could bring a state jobs and economic prosperity and telling them to invest elsewhere. You could go door-to-door and punch them in the face, or just set the nation’s highest personal income tax rate, the net effect is exactly the same.

The biggest fallacy the high marginal tax crowd falls into is the “fixed pie” thinking – since businesses and high income earners are unlikely to move, if you tax them more they will just sit like sheep and take it and pay into the state to fund their myriad social programs. That may be true in the short run and for individuals that are tied to their community, but I guarantee that every wealthy person has an accountant who carefully tells them the negative impact of residing in such a high tax state and the benefits of moving elsewhere on their take-home pay. If they have a choice to invest more in Oregon or go elsewhere, other states look much more inviting. Over time, investment slows, and then there are more and more articles with the sad faced children just like this one, and pleas for the rich to pay their “fair share”.

The problem is, the rich aren’t stupid, and a high state income tax is basically pushing them to invest and live elsewhere, particularly somewhere warm with a tax friendly climate like Nevada, Florida or Texas.

11 thoughts on “What Do Hungry Children in Oregon Have to do with Tax Policy?”