The graph below is what’s got everyone talking about global warming. It’s a graph of the change in average global temperature since the beginning of the industrial era.

It shows, quite conclusively you’ll agree, that making steel, using a leaf blower and driving your SUV is raising carbon dioxide (CO2) levels in the atmosphere. And because CO2 is a greenhouse gas, carbon dioxide raises the average temperature of the Earth. So, when Kansas turns into a desert and Florida disappears under the ocean, it’s your American gas-guzzling fault. Correct?

Not so fast, my media propagandized reader. The Woods Hole Oceanographic Institute (WHOI) has been doing extensive research on the question of global warming and have begun to weigh in with their results. Their verdict can be summed up in one sentence: The earth has been warming and cooling in regular cycles for hundreds of thousands of years. At least.


What we’ve been seeing is what I’d term ‘cherry picked’ data, designed to support a particular political agenda. How many of us have been shown graphs like the following? 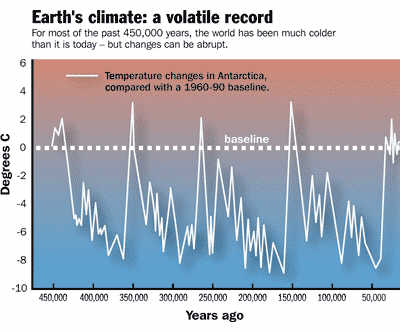 Change In Average Temperature In Antarctica Over 450,000 Years

Looks like a heartbeat doesn’t it? It’s quite regular. Whatever process is driving global warming and cooling has been doing it on approximately 110,000 year intervals for at least the last half million years. Other data shows similar changes over the last million years.

So what process is driving this clockwork-like cooling and heating of the earth? One possible explanation is Croll-Milankovich Cycles, a combination of three things:

A) Orbital Eccentricity – A slow change in the shape of Earth’s orbit from more circular to more elliptical on a time scale of approximately 100,000 years.

NASA has a nice kids site with a really useful animation of the change in Earth’s orbital shape over time.

B) Precession of the Equinoxes – The slow wobbling of the Earth on it’s polar axis. For example, think of the way a top slowly wobbles on it’s axis as it spins. The Earth does the same thing, taking about 26,000 years to make one wobble.

(Off topic note: The Equinox is the name given to those two times each year when night and day are of equal length. It occurs once in the spring, the Vernal Equinox, and once in the fall, the Autumnal Equinox. The name literally translates as ‘equal night’. Over time, as the Earth wobbles on it’s axis, the point where the sun rises at Vernal Equinox moves backward as seen against the the constellations behind it. This is what is meant by the equinox ‘precessing’ (precess: to go before). When the study of astrology was begun, the Sun was rising against the constellation of Aries at the Vernal Equinox. That’s why astrological lists begin with Aries. The Sun is currently rising against Pisces and will soon (in about 200 years, IIRC) begin rising against Aquarius. That will be the “Age of Aquarius” for those old enough to remember the musical Hair. )

On a finer scale, research into temperature patterns shows more confusing results. Lloyd Keigwin, Senior Scientist in the Geology and Geophysics Department, has a paper in Oceanus entitled Sedimentary Record Yields Several Centuries of Data in which he discusses the results of the study of a long series of measurements made at sea and the study of deep sea sediments. His result?

Although this is not universally accepted, it is widely accepted that eventually changes to Earth’s atmosphere will cause climate warming. The message from the Bermuda Rise is that human-induced warming may be occurring at the same time as natural warming—not an ideal situation.”

I think Lloyd Keigwin summed it pretty well. Carbon dioxide is a greenhouse gas (by the way, so is water vapor) and it probably is adding to the average global temperature to some degree. To what degree? I don’t think anyone knows. However, it is certainly not the primary engine of global warming, as some would have us believe.