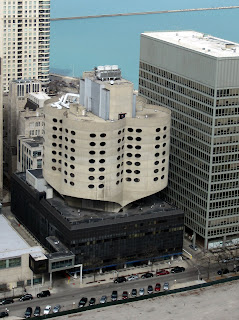 There has been a preservationist battle over the Prentice Women’s Hospital, which looks like a strange concrete spaceship from a 1950’s sci-fi movie. Here is an article from a preservationist web site describing the building and its history. From the article

A concrete, cloverleaf-shaped icon, Prentice Women’s Hospital has added drama and interest to the Chicago skyline for nearly four decades.

One of the current issues is that it isn’t adding ANY interest to the Chicago skyline anymore. The reason for this is that myriad other, larger buildings have been added all around it – the only reason that I can see this at all (other than being on the street, facing it), is that I am atop a building that ACTUALLY is part of the skyline and looking down.

While I am all for preservation in various forms it seems odd to demand that a hospital retain an old facility like this. The facility is clearly a high maintenance item – just look at it – and can’t be very practical to refit for today’s technology and practices. And there is nothing else to do with this facility – it is in the middle of the hospital campus so you can’t just turn it into some “boom boom” nightclub like you could here in River North, or even into some sort of weird shopping mecca like Bloomingdales did with the old Shriner’s building (site of the circus).

I support the preservationists but this one seems like a lost cause because it would obviously be impractical and fiendishly expensive to do anything with it, and it isn’t in a good location for alternative uses. The building is also too tiny to be called part of the skyline anymore. And plus, it is damn ugly.