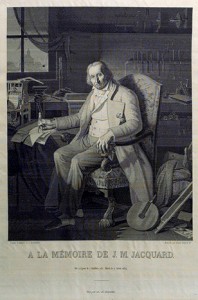 Ran across some information about a project to create an open-source Jacquard loom. A Jacquard has the ability to weave elaborately-patterned fabrics by controlling each individual warp thread in the weaving process. Machines that can handle a large number of threads are pretty costly…numbers I’ve seen are in the $30K-60K range…and there are evidently a lot of hobbyists and small businesspeople who would like such a loom but are unable to afford one. Hence, the open-source loom project.

The Jacquard is important in the history of technology, and I’ve been intending to write about this topic for a while. A good source is Jacquard’s Web: How a Hand-Loom Led to the Birth of the Information Age, by James Essinger. (I’m not a weaver, so hope that those who are will forgive and correct any inaccuracies or incorrect use of terminology in this post.)

Traditionally, the weaving of patterned fabric was a very labor intensive process requiring that for each throw of the shuttle, a number of cords must be pulled or not pulled in order to lift or not lift specific threads. Essinger estimates only 1 inch of fabric per day, for a weaver and his assistant, could be produced–so these fabrics were definitely luxury goods. 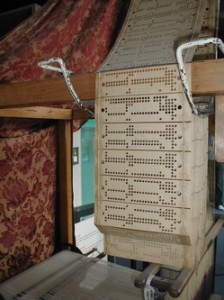 In 1802, Joseph-Marie Jacquard, son of a master weaver in Lyons, perfected a machine which used perforations in paper cards to perform the selection function. An earlier attempt at automation had involved music-box-like rotating cylinders, but with Jacquard’s approach the cards could be chained together without limit–2000-card patterns were fairly common–and were cheap and relatively easy to prepare. The image of M Jacquard himself, at the top of the post, required 24000 cards for its creation. The loom did a lot for the prosperity of the French textile industry and especially for the city of Lyons; Jacquard was paid substantial money by the government for his patent and was personally recognized by Napoleon.

Circa 1837, the British mathematician/inventor Charles Babbage proposed the use of a Jacquard mechanism to control a programmable mechanical computer he called the Analytical Engine. In an elegant simile, Babbage’s collaborator Ada Lovelace wrote: We may say most aptly that the Analytical Engine weaves algebraical patterns just as the Jacquard-loom weaves flowers and leaves. The Analytical Engine was never completed, but in starting in the 1880s, the American inventor Herman Hollerith developed a family of machines for processing information punched on cards. (While Hollerith never credited Jacquard as a source for his ideas, the connection seems pretty clear given that his brother-in-law owned a silk mill including Jacquard machines.) The company that Hollerith created became IBM, and in 1944 this company partnered with Harvard University to create a general-purpose electromechanical computer using punched paper tape for programming. (Speaking of paper tape, this technology was applied circa 1857 for storing and transmitting/retransmitting telegraph messages. It was later heavily used for computer input, along with punched cards, and was also used for the numerical control of machine tools—cutting metal to design in a way similar to the way the Jacquard weaves to design.)

Returning to Jacquard weaving per se–at some point (in the early 1980s, it appears), the looms began evolving from purely mechanical devices to computer-controlled systems in which the threads were lifted by electrical solenoids responding to computer command. I’m not clear on how many of the classical Jacquards versus the computer-controlled versions are currently in use–this 2004 NYT article is about Scalamandré, a high-end textile company in NYC, shutting down its purely mechanical Jacquards and moving production to a computer-based operation in South Carolina. It seems fair to say that perforated paper was the world’s primary means of digital and machine-readable information storage for close to 200 years, which is a pretty good run.

Which brings us back to the open-source loom project, which is concisely described by project instigator/leader Margarita Benitez in this video…more information about the project here. They did hit their Kickstarter funding target of $10K, and the project status is being maintained at this site.

It’s an ambitious effort, involving as it does a combination of mechanical, electrical, and software technologies. The idea is that both the software and the plans for the hardware will be made publicly available–cost of purchased components I would expect will be nontrivial, but hopefully a lot less than $30,000.

The project is an interesting intersection of the worlds of hacking (in the benign sense) and crafting.