We are hearing a lot more about the Spanish economy in the news. Spain is the latest Euro country to begin having trouble as their nation teeters under too much debt.

As economists debate items like “austerity” and what the European Central Bank should do to fix the issues, these discussions can seem surreal and academic, and they are. The more that the economists talk about arcane topics, the further we get from underlying truths.

Economies have to PRODUCE SOMETHING OF VALUE, and they must EXPORT THESE ITEMS, or CONVINCE PEOPLE WITH ACTUAL CURRENCY TO VISIT. The simplest example of this sort of behavior is looking at a country that produces little of value to the outside world, that no one wants to visit, and how poor that country is. Go to Africa or South or Central America or Asia and visit one of these areas. The situation is grim.

These poor countries are almost always associated with lousy government, because it is human nature to want to better yourself and people everywhere are intelligent. When given a chance, they will work to grow or build something of value so that they can sell it in order to try to lift themselves out of grinding poverty. However, if the country has no infrastructure, no security, and puts punitive short-term economic controls on the country or currency, this limits people’s ability to improve their situation.

In Greece as we move to some sort of end game, the impact of this is on full display. Greece is not like these countries listed above; they have a beautiful, accessible country that should by all means be full of tourists. They can grow crops that are desired by others, and they have some local resources and infrastructure.

However, the items that they lack, such as modern medicines and oil, will soon become dire issues because without the Euro (which essentially is the backing of Germany) and strong exports, they will have a very poor currency on their own and be unable to borrow except at the highest of interest rates, forcing the country to make wrenching decisions.

Greece, like many Euro countries including Spain, Italy and France, has a huge class of governmental parasites. This isn’t efficient government like Switzerland; these are large bodies of individuals that create rules that hamstring businesses and chase exotic goals like wind power while often failing at basic tasks, such as collecting taxes and in the case of Greece, even making ownership of land and transfers clear and simple.

The “value” of these government parasites in a time when the country is unable to obtain fuel and medicines will be immediately apparent at not just zero, but intensely negative, since these civil servants are expensive and will eat up the entire budget. Government, beyond basic elements (which don’t function very well in most of these countries at all), is a luxury, and countries strapped for cash don’t have those sorts of luxuries if they want to grow and thrive.

As I was reading about Spain and the technical discussions of interest rates and central bank interventions, I thought about “what does Spain mean to the world economy?” Spain is a country with gleaming infrastructure, bought by Euro transfers, and endless flats for holiday takers from elsewhere. Their world class companies? Not so much. 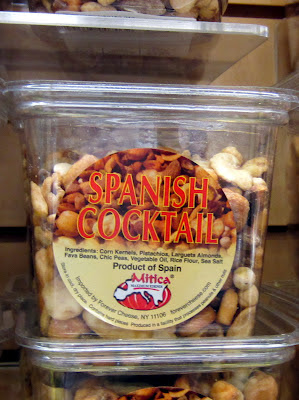 I did see this Spanish export above, as I looked around for other tangible measures of Spain in the USA. Beyond that, it gets fuzzier.

Spain deserves credit in trying to turn Euro subsidies into long term businesses, such as their wind industry, which of course died instantly the second the subsidies stopped coming, as I discuss here. Spanish companies also used their low interest rates (courtesy of Germany) to try to expand abroad, particularly in South America, which makes sense given their long term ties there and common language. Unfortunately at least one of those investments went sour as Argentina became the poster child of government intervention and seized their investment in Repsol.

Spain, Greece and the other countries in Europe will get a hard lesson in what you can afford in government, and how important it is to 1) export 2) draw tourists 3) produce something of value. You can’t measure a country based on its consumption, especially when most of it is borrowed and where those funds are spent on non-value added industries like civil servants. This sort of sugar-fueled binge has to end and then the country faces the truth that you are as rich as your ability to add value to the world or draw in someone else who has money to spend it in your country.

My optimism for the US is that when this reckoning comes to the US, as it inevitably must, the US is blessed with abundant natural resources including water and farmland. We have huge deposits of all fuels and minerals once the inane limits are removed of drilling and mining, which would happen immediately should people understand the consequences of living without these items (when we can’t import them). We can turn into a production powerhouse by taking the mass incentives that we put on people to “not work” and our huge spending on government that doesn’t add value (the vast majority of it) and turn that off and re-direct those energies into the private sector. The US can also “change the game” by becoming a magnet for foreign wealth and high energy contributors to come here and enjoy the freedoms that they don’t have elsewhere – the freedom of worship, to have access to firearms and protection, and transparency in government.

So when you are reading the arcane policy discussions about “austerity” and “quantitative easing” and other related items, you need to realize that the “real” economy will soon emerge when the debt-fueled consumption and mis-directed (i.e. government directed, or “guided”) investments cease. Economies can only afford the government that they need, that is useful, and that helps to support growth.

4 thoughts on “(Spain’s) Economy and Reality”